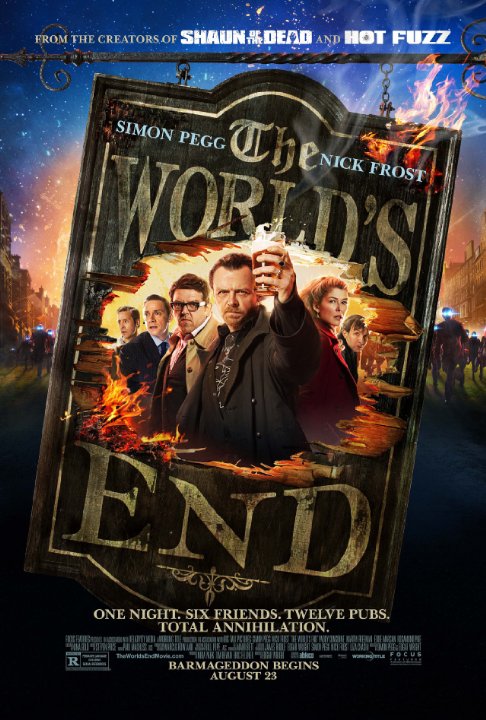 Plot: Two friends embark on one last pub crawl leading up to the world's end. Are these two drunks the last hope for humanity? It seems like it.

Hilarious. It might have been the best comedy of 2013.

What started with Shaun of the Dead and continued with Hot Fuzz comes to a pretty much perfect conclusion in The World's End. The so-called "Blood and Ice Cream Trilogy" (or Cornetto Trilogy if you will) is simply one of the greatest achievements in British comedy and Edgar Wright, Simon Pegg and Nick Frost should be quite proud of the result.

The World's End opens in 1990 - as a group of five friends embark on an epic pub crawl in their hometown of Newton Haven - the "Golden Mile" - 12 pubs, sixty pints... all led by their self-professed leader Gary King. They don't quite make it to The World's End, but for King, this turns into the pinnacle of his life. Where his friends all go on to become successful business and family men - Gary is trapped in the past. He comes upon the …

Yes, it is the three musketeers - Simon Pegg, Nick Frost, and director Edgar Wright. The hilarious British trio is back, delivering their epic finale to the fabulous "Blood and Ice Cream" (or "Cornetto," or "Rotten Tomatoes 91%) trilogy. I'm a huge admirer of Edgar Wright and his films. I think Shaun of the Dead and Hot Fuzz, the previous two "Blood and Ice Cream" films, are absolutely marvelous. They're so well made and so damn funny that it's just ridiculous. He also made 2010's Scott Pilgrim vs. The World, which I find funny, clever, unique, enthralling, and entertaining as shit. Does The World's End live up to Wright's previously high standards?

The World's End follows a group of five guys - …

Those familiar with 'Shaun of the Dead' and 'Hot Fuzz' will find 'The World's End' to be more of the same. That is the best possible compliment I can give to this film. The trio of Pegg, Frost, and Wright have once again delivered a hilarious and highly enjoyable comedy. The basic plot involving old pals reuniting for a pub traveling adventure is only the tip of the fun to be had here. The story is supremely well written, containing characters whose history and inner turmoil are gradually revealed over time. This leads to some true emotional moments placed perfectly amidst the sharp comedy and fantastic, crazy sci-fi elements. For a film filled with so much alcohol consumption, it's really all about intervention and embracing basic human flaws. The mixing of genres has never been …

Silly - yes - but I though it was excellent and right in line with the previous Pegg/Wright/Frost films - if not the best in the series. I was worried it was going to go too far off the rails, but I couldn't have been happier with the results. As of right now, it's my favorite film of the year.

massive let down i thought. poor&amp;nbsp; and silly movie , peg was good in it though

I saw it and definitely enjoyed it quite a bit. But I want to give it a re-watch before I write a review. I highly recommend it, though - it's amazing fun.

Agree 100% - both Shaun of the Dead and Hot Fuzz are extremely enjoyable - this is going to round out this particular trilogy, and I expect this will leave me just as satisfied.

Simon Pegg has yet to disappoint me. This plot has such great potential. Cannot wait. It will be amazing.