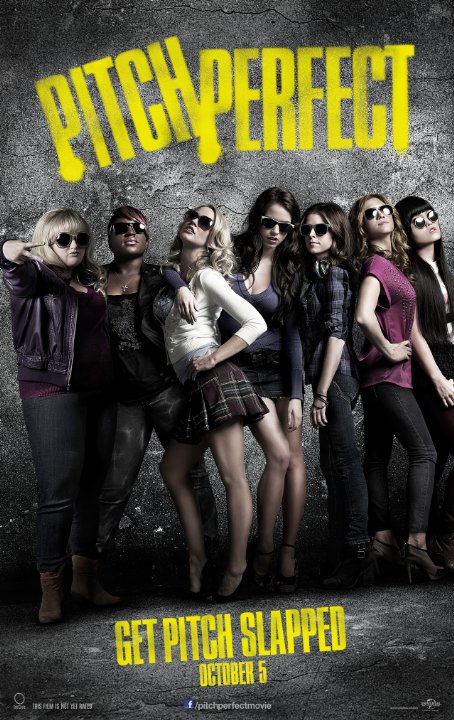 Plot: Two a cappella groups vie for supremacy, sparking an all-out war but a rebellious girl looking to escape her unhappy school life may tip the scales when she decides to join in. -- Chris Kavan

It's not the world beating movie that some think it it, but it's fun and does have some good musical numbers. I'm not a Rebel Wilson fan, but she's very good as her sarcastic funny self. The film doesn't reveal anything new about this genre, it doesn't really do anything special, it's just a good, well put together film. And, let's be honest, the best part of this film is Elizabeth Banks (Gail) and John Michael Higgins (John) commentary.

People are going nutz over this movie. Yea it's got good musical numbers and some great jokes but there's such a mean-spiritedness behind it that it leaves a bad taste in your mouth.

Okay this movie is not perfect but it's fun as hell when they started singing. Two a cappella groups vie for supremacy, sparking an all-out war but a rebellious girl looking to escape her unhappy school life may tip the scales when she decides to join in. I mean the actors and the crew who sing in the movie really can sing in really life.

The Pitch is quite perfect...

"I sometimes have a feeling I can do crystal meth, but then I think, mmm... better not."

Beca (Anna Kendrick), a freshman at the fictional Barden University is an aspiring DJ who wants more than anything to be a music producer but her dad makes her go to college first. Whilst there she decides to join the school's all-female vocal ensemble Barden Bellas, led by the authoritarian Aubrey (Anna Camp) who's hell-bent on taking the International Championship of Collegiate A Cappella. Problem is everyone is tired of Aubreyâs old-school ways and never- ending performances of Ace of Bass' "The Sign."It's clear that the Bellas need to come up with a new routine if they want to win it all.

The Bellas' arch rival is the all-boys group, the Treblemakers who are the favorite to win the …

An aspiring disc jockey, Beca, enters school with music on her mind. But she never thought of joining an a cappella group until she finds herself in an all-female one.

Fine. The voices are all cute and really entertaining, but we have to admit that this movie did not offer something BIG (except fat amy, lol, btw I love her!). Plus, isn't it obvious that the "a cappella" songs are somewhat mixed with some accompaniment, especially the last performance.

ANNNA KENDRICK. I was really surprised although I heard she is really talented, I just never thought she could sing. I knew her as the girl from twilight but obviously, she as "Beca" is WAY BETTER ACTRESS than the one who played "Bella".

I did not expect for a good turn out of the story, how it would end. BUT MAN, IF I WAS …

If you like the tv show 'Glee' by all means watch this....Cause that's exactly what it is..loads of singing with a bit of drama included. Twilight star Anna Kendrick portrays Beca The film revolves around the Bellas, an all-female a cappella group from Barden University. Reeling from a humiliating loss at the International Championship of Collegiate A Cappella highlighted by Aubrey vomiting about 19 gallons, the group struggles to find new members the next year.

Beca (Anna Kendrick), a Barden freshman, has no desire to go to college, but is forced to attend by her father, a professor at the university. Wishing to instead move to Los Angeles to pursue a career in music production, she takes up an internship at the school radio station, where she meets fellow freshman Jesse (Skylar …

No posts have been made on this movie yet. Be the first to start talking about Pitch Perfect!