Dawn of the Planet of the Apes Movie Information 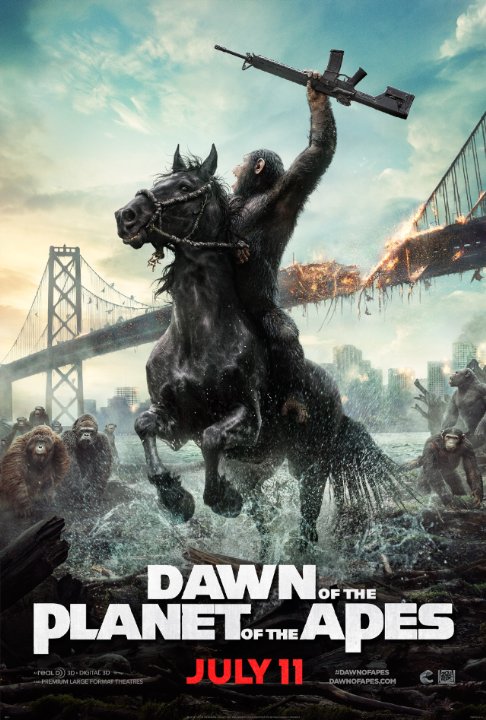 Plot: Ten years after a virus has decimated humanity and given rise to a growing nation of genetically-modified apes, led by Caesar, the two sides come to a fragile peace. But this peace will not last and soon a war arises - one whose outcome will determine which species remains the dominant force on the planet. -- Chris Kavan

With considerably more thematic and narrative depth than its rebooted predecessor, "Dawn" carries the "Apes" franchise to bold new heights.

this one works better then the first of these new ones. it's ok now for the apes to go...ape...and colonize. I just saw "Lucy" and I can say that if the new 100% brain capacity it's open for our imagination to ...imagine,[ the leap from ape/paleolithic hominid to modern human it's a pretty long story and it's a science that studies facts.] it's ridiculous to manipulate, not horses, but guns. the new arise specie: these apes. for a script/novel/naration it's a mistake. a soldier from nowdays can fire a musket 200 years old, also probably, he can use a future weapon based on his training. in numbers they destroy defence on bridge in the first one and now are able to take aim, load and gun down people. it's a "hm!".

"Dawn Of The Planet Of The Apes" by Yojimbo

The last vestiges of the human race form an uneasy truce with Caesar and his community until fear and suspicion on both sides results in all out interspecies war. Although Rise Of The Planet Of The Apes had some extremely impressive special effects that breathed life into the simian characters, it was the strong themes and human relationships at its core that made the film something special. Once again thanks to some superb CGI work and Andy Serkis' specialist talents, Caesar makes a very strong protagonist and the relationships between the characters work quite well, but this sequel is more a straight post apocalyptic action thriller than the more thought provoking previous film. It's all very impressively done, with visually pleasing action sequences set within a beautifully realised …

An awesome movie when it's about CGI

After the magnificent "Rise of the Planet of the Apes" from 2011, Caesar the legendary ape who started the revolution for his species, can show up again in this sequel. It's 10 years later and the world has been decimated thanks to the Simian virus. This flu originated from a genetically engineered virus and ensured that the apes became systematically wiser. The magisterial beginning shows Caesar in close-up and from there it's a run-up to an amazing first 20 minutes in which no human is seen and we witness the ins and outs of the apes commune, who communicate by use of a kind of sign language. They have retreated into a mountainous forest near San Francisco, where they have formed a primitive …

Here's how I rank the trilogy:

I didn't do my ranking from worst to best, it's just Dawn and War upped the standard that Rise set

Easily the best of this new Apes trilogy.

After X-Men: Days of Future Past, this is probably my other big movie I am looking forward to this summer. I was also a big fan of the original, and all indications are this sequel is a step up - I would say the potential is off the charts - I hope it lives up to the (early) reviews.