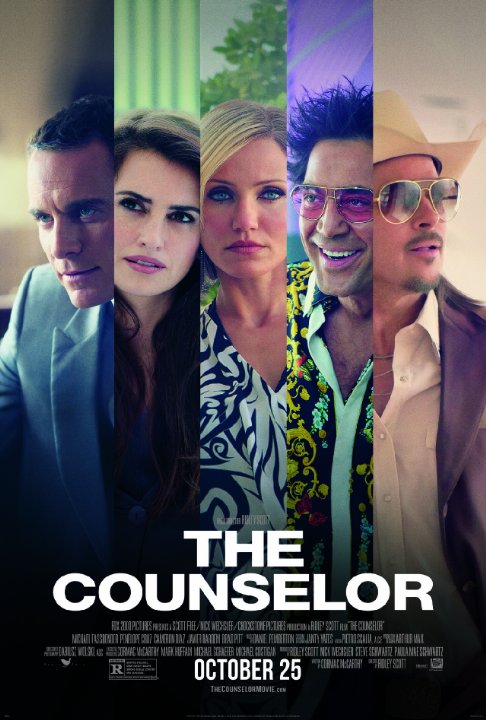 Plot: A respected lawyer, looking to increase his fortunes, gets involved in the illegal drug trade and quickly finds himself in a dark, unforgiving world - and way over his head. -- Chris Kavan

So many people are down about this film - and I can see why. The pseudo-intellectual monologues are ham-fisted and, quite frankly, a bit tone deaf. The pacing of the film leaves a lot to be desired and the characters are mostly unlikable (narcissistic, sociopathic, weak - take your pick). But the film does great into going to some dark places - especially the grunts who will literally do anything for money. I was expecting more from Ridley Scott and Cormac McCarthy, but it wasn't nearly as bad as I was expecting.

The biggest Mystery about this movie was why was this made.The Counselor. This is by far the most boring movie of 2013, the Directing and the acting are average but the story is very hard to follow and the characters are shallow. and this movie will get a 0 and a half out of 4 star's "boring and forgettable movie".

A dead boring first hour and an impressive ending

A man would give entire nations to lift grief off his heart and yet, you cannot buy anything with grief, because grief is worthless.

Ridley Scott, of course known for his masterpieces "Blade Runner" and "Alien",didn't …

"The Counselor" by Yojimbo

An affluent and otherwise respectable lawyer falls in with some wheeler dealers of the criminal underworld and unwisely decides to do business with a South American drug cartel. With a script written by Cormac McCarthy, direction from Ridley Scott and a cast that boasts Michael Fassbender, Brad Pitt, Javier Bardem and Penelope Cruz, you know you're in for a treat. Or so you'd think. The plot on offer is like a grindingly workanlike rehash of an episode of Breaking Bad and populated by singularly uninteresting characters spouting pretentious waffle and occasionally engaging in passionless and robotic sex scenes - in fact Cameron Diaz enjoying the carnal knowledge of a sports car (I kid you not) is cringeworthy on a Gigli-esque scale. Extremely slick and impossible to care about, the …

great cast but it leaves you empty

Great cast, about a guy who gets mixed up in the cartel. The film is very talky yet its hard to know what really going on a lot of the time, the dialogue is full of almost poetic wise words. with long passages of pointlessness its like the writer wrote the best wise words he could but then made the mistake of using them for most of the characters. The lead up to the end is weak , so much is said in this movie yet so much is unexplained and feels empty. then it just ends . Leaving you thinking wow that turned out depressing. it offers no hope no revenge no follow up no redemption no nothing except bleak reality. which would be fine and a different ending to most films if it was not for the fact that the movie had very little middle story or action. it was in short too empty to just end …

No posts have been made on this movie yet. Be the first to start talking about The Counselor!