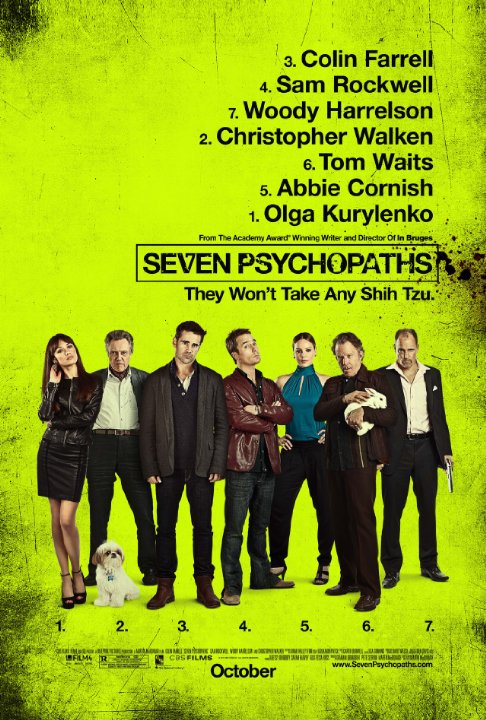 Plot: A down-on-his luck screenwriter gets some great inspiration when he finds himself in the cross-hairs of the criminal underworld after a couple of his friends kidnap the Shih Tzu of a gangster. -- Chris Kavan

Likely the most violent Hollywood farce ever made, "Seven Psychopaths" is a bit too on the nose at times, but the sick sense of humor is hilarious and the characters are delightfully unhinged.

A very clever setup that invokes Get Shorty, Taxi Driver and some Tarantino-esque twists - this is a fun, though very violent romp, in the life of screenwriter, his best friend/killer, a mob boss looking for his beloved pet and a man who kidnaps dogs so he can pay for his wife's cancer treatment (and who also hides a tragic past). There's s lot going on here - but, man, is it ever well done. Characters, stories - it all comes together. The ending is a bit more abrupt than I would have liked, but overall, I was highly impressed.

Psychopaths out there this movie is for you. The film is about a down-on-his luck screenwriter gets some great inspiration when he finds himself in the cross-hairs of the criminal underworld after a couple of his friends kidnap the Shih Tzu of a gangster. This is the best movie of 2012, I mean this movie has clever jokes and good writing.

A boozy screen writer, his best friend and a professional dog-napper become the targets of a ruthless mobster when they unknowingly steal his shih tzu. The follow up to the brilliantly oddball In Bruges, Seven Psychopaths is clearly aiming more for the American mainstream, being very much in the Robert Rodriguez/Quentin Tarantino mold. It does have the same post-modern slant and zany humour of McDonagh's previous collaboration with Colin Farrell, who once again strikes up a winning partnership with his co-star, this time Sam Rockwell as the unhinged movie junkie desperate to re-enact his own revenge fantasy. As a whole it reminded me of Tarantino's early work with lots of Grindhouse style asides as they spew forth their ridiculous script ideas so it's not as original as In Bruges, but …

A Flare Gun at the Final Shootout???

Was John Dillinger was shot in the eye or not????

"Seven Psychopaths" is a movie unlike your average Hollywood movie but it's hard to explain without giving too much away. There are plenty of twists, Tarantino-esque violence (which I loved especially after watching Django Unchained â The D is silent lol). However it was a pretty funny movie, well-written, superbly acted, engaging, provocative, and above all else, it has a humorous and witty dialogue.

The movie begins with a drunken washed up Irish screenwriter Marty (Colin Farrel) who wants to write a non-violent script about seven psychopaths. Keen to help is best pal Billy (Sam Rockwell), a slightly unhinged and failed actor who's finding it more lucrative to be in the dog-kidnapping business together with his partner in crime …

Marty - "And what do you think we should do in real life?" A concept similar to Get Shorty mixed with touches of Best in Show ang glimpses of Pulp Fictions writing. An alcoholic wanna be writer Marty (Colin Farrell) and Billy are good friends together with Hans (Christopher Walken) steal a dog of a ruthless gangster named Charlie (Woody Harrelson). Several psycho's will be involved. The cast were spectacular and funny.

This was so much better than In Bruges in terms of action, pace and humor. Ending was a nice touch and screenplay very engaging with a message. Martin McDonagh shows a promising career with this entertaining effort which shows flashes of cool Pulp Fictionesque sequences, which he may reach in the not so distant future given the right cast/screenplay. Memorable …

This is a clever story about a psychopathic.

I liked In Bruges, but didn't love it - however, I still think I will give this film a shot given the positive feedback.

I agree it's an awesome movie. If you liked In Bruges you'll have a blast with this one.

Chris, I couldn't recommend this film enough. &amp;nbsp;It's in line with the director's previous 'In Bruges', but with much more laughs and gore. &amp;nbsp;Probably the most fun movie I've watched all year.

I haven't seen this yet, but some of my favorite movies could be described as excessively violent - plot is relative to the person watching - some people might find Memento dumb because it goes backwards. Although I'm probably going to hold off until it hits rental status, I will check this out - the actors involved make me think it will be worth a watch.