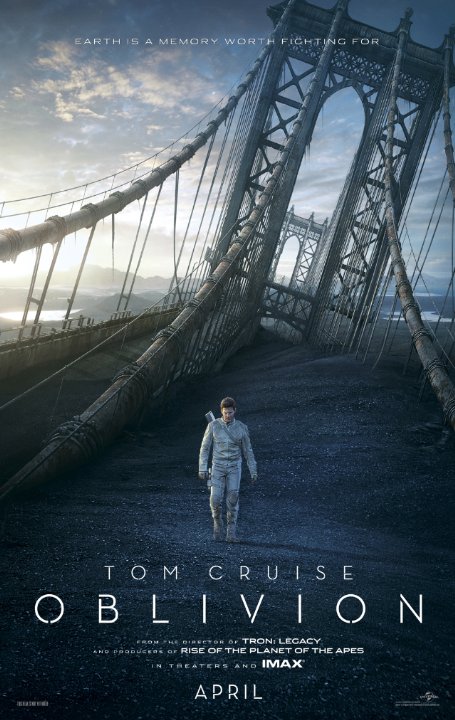 Plot: After devastating war that brought Earth on the brink of extinction, the remaining people are assigned to protect the last useful sources of energy. That is until a technician on the ground discovers something that changes everything he has been told. -- Chris Kavan

Okay when I went to go see this movie in the cinema they was people talking thought out the film and my dad told them to shut up. After devastating war that brought Earth on the brink of extinction, the remaining people are assigned to protect the last useful sources of energy. That is until a technician on the ground discovers something that changes everything he has been told. This movie had good visual effect's/tom cruise and Morgan freeman was good.

starring tom cruise this is a very good movie, i really enjoyed it and the ending. it has some good twists and keeps you guessing throughout .,, its very different to most movies which i liked, i guess you could argue it has a mad max/blade runner vibe about it but without actually being anything like those films, its one of those movies that is worth watching again. . best movie i have seen so far this year

Featuring some really great visuals, a stylish soundtrack, and two really good lead performances from Tom Cruise and Andrea Riseborough, the first forty minutes were absolutely fantastic. Unfortunately, Oblivion includes a few too many predictable, unimportant, or borrowed plot twists that really made the film less satisfying than it could have been.

A technician servicing the last outpost on a post-apocalyptic Earth recovers an escape pod dating from before the war which challenges everything he thought he knew about the world. As you can probably guess from the presence of Mr. Scientology, Oblivion is very much a mainstream sci-fi crowd pleaser, but thankfully it is done with enough reserve and intelligence to avoid the kinds of brain dead Bay-isms that plague modern cinema. To knowledgeable sci-fi aficionados the plot will seem very familiar and predictable, "borrowing" as it does from classics such as Planet Of The Apes and The Matrix, and if you've seen one film in particular (I won't name it as it would be a spoiler extraordinaire) then the big "twist" will be more than a little obvious. But Oblivion is attractive, slick and …

I was very interested and was anticipating this movie, simply because of the director and because I wanted to give a Tom Cruise movie another shot... And no shots will ever be given again.

I am tired of Tom Cruise. He made great movies in the nineties, with some pretty great performances attached to the movies, too. But ever since the last Mission: Impossible movie, he started playing the same character over and over again. Oblivion is no exception.
To name a few positives, the special effects and music are quite good in this. The score by M83 had a very pre-techno vibe, continuing the tradition after Tron Legacy had Daft Punk. But that's it.
The script is quite lazy and doesn't let anything happen to the characters. At the end of the movie, it feels like we're exactly where we …

A film dominated by a great soundtrack, stunning visual effects and scenic locations. A case where style over substance is implemented. It's plot however and pace were questionable and dreary. The swift beginning about the background on Earth felt rushed and the story feels exhausting to follow. Obviously Tom Cruise shows an earnest portrayal but unfortunately the two ladies were uninteresting. The drones were the only thing from keeping this sci-fi flick from spiraling to mediocrity. Action sequences were insufficient and the romance of Victoria "Vika" Olsen (Andrea Riseborough) and Julia (Olga Kurylenko) was a bore. Jack Harperâs (Tom Cruise) character maybe impressive but lacks appropriate character development and Morgan Freemanâs role felt like an old Morpheus. …

It'll be the first blockbuster of the year for sure.&amp;nbsp; I'm looking forward to it.

Anyone else thinking this is going to be the first major film of the year? I know Oz the Great and Powerful opened pretty strong but c'mon, Tom Cruise, Morgan Freeman - big budget action/sci-fi - even if this gets savaged by critics, I see this easily topping the $79.1 million that Oz opened with. Agree? Disagree? What say the people?