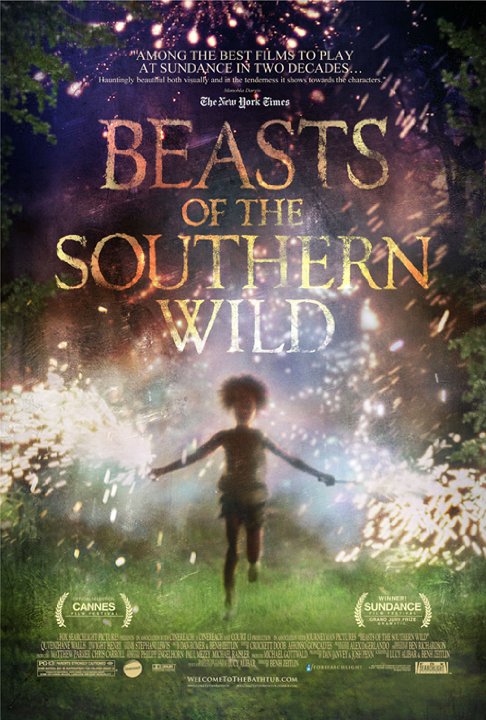 Plot: Six-year-old Hushpuppy grows up in "the Bathtub" a southern Delta community where her father, Wink, seems harsh but is only preparing her for life on her own. A storm and a sudden illness brings on this life much sooner than expected and as beasts menace her, growing ever closer and larger, she will have face down her fears. -- Chris Kavan

A genuine film shown from the perspective of a child.

let's get wild.beasts of the southern wild.this movie was Brilliant I mean they are some really good shots and the ending was sad.and this movie will get a 4/4 star's best movie of 2012

Poetic. The Oscars brought me to this film; I was curious to see this film after its 4 nominations, and still am after having watched the film. There are some brilliant elements on display here; the movie delves into some deep aspects of survival, family, home, and civilization. The film also features some intriguing imagery and symbolism, but those things combined didn't come together as I was led to believe. The film was not emotionally resonant at all (in my opinion). An ambitious directorial debut from Benh Zeitlin, but I do not understand the Oscar nominations (at all). I wasn't impressed by Quvenzhane Wallis's performance.

"Y'all gotta learn how to survive now." It was upsetting to see an adult swear so much in-front of kids to make a point about meat, water rising and survival. Even Hushpuppy has got to swear. Names such as Miss Bathsheba, Hushpuppy and Wink makes no sense especially the scene where Hushpuppy confronts the Aurochs unharmed. Highlights were the astounding little girl named QuvenzhanÃ© Wallis, believable special effects and steady skillful direction. Build-up of a more dramatic impact and character development could ave been better. The score was apt for the tense scenes. Some note worthy lines - "I see that I am a little piece of a big, big universe, and that makes it right." "Strong animals know when your hearts are weak." and "The whole universe depends on everything fitting …

Hushpuppy, a six-year old girl, lives in a community where her father is preparing her to a life without someone to protect her. A journey of a young girl with a suffering father from sickness, and a community about to sink as ice caps melt.

I cannot remember that much about this film. Saw this film once and I know I was entertained and yes, it has a good story in it. I remember the "hero" Hushpuppy (Quvenzhane Wallis) acting astonishingly, not only because she is very young, but because she really has something, with her actions and emotions, she delivered both the childliness and toughness the character needs. Moreover, I found it really amazing how the team, the director, the creators, made it look as if this huge and wild animal is real.

It has been a long time since Iâve been to the cinema and seen something so strikingly original, thought provoking and beautiful. I really hope this Benh Zeitlin guy makes more movies.

The movie makes a fairy tale out of tragic real world events as seen through the eyes of a little girl named Hushpuppy. She sees the world much differently then most of us, partially because her home, The Bathtub, is unlike many of our own homes, filled with a cast of strange, but loveable, characters. Itâs her view of things, and Wallisâ performance that make this movie rise above and beyond most of the other movie I saw in 2012.

No posts have been made on this movie yet. Be the first to start talking about Beasts of the Southern Wild!