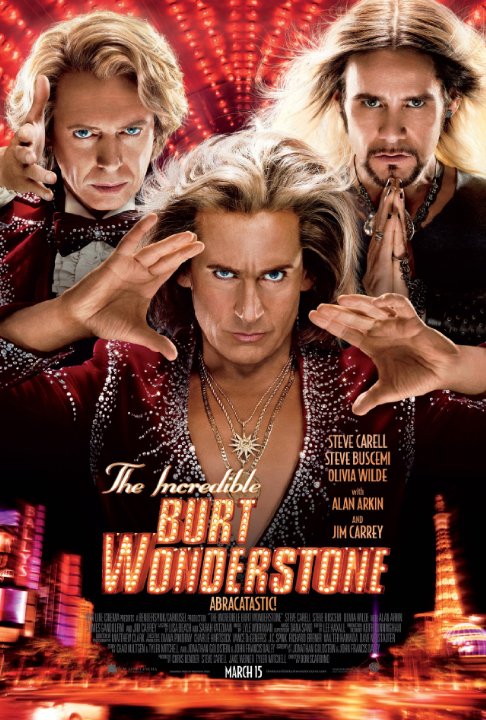 Plot: A long time Las Vegas magician, burnt-out and jaded, breaks apart from his stage partner and finds himself struggling as an act, especially when a hot, new street magician becomes all the rage. -- Chris Kavan

I can't believe how many bad reviews I read for this movie.I actually thought it was alright.With Jim Carrey, Steve Carrell, Steve Buscemi & others I guess the movie could've been better.With all the bad reviews I read before I watched The Incredible Burt Wonderstone I was expecting a piece of garbage so I was suprised I liked it at all.There is something off about the movie but I can't figure out what it is.I guess I thought it would be funnier.My main problem was the ending.The movie was fine but the ending just seemed over the top even for a movie.Everything seemed to be going fine up until then

A long time Las Vegas magician, burnt-out and jaded, breaks apart from his stage partner and finds himself struggling as an act, especially when a hot, new street magician becomes all the rage. this movie was hated by critic's and I see why I mean the characters are not likable but the only likable person in the movie was Jim carry.

As a kid Burt Wonderstone (Steve Carell) wanted to be a magician after getting a kit on his birthday. Anton Marvelton (Steve Buscemi) befriends Burt and have become partners. A risky street magician named Steve Gray (Jim Carrey) becomes popular and the shows of Burt dwindle. It was nice to see the late James Gandolfini in this fatherly role. Carrey despite a supporting role here was still hilarious. Buschemi was really funny as well. Soundtrack was applicable and pace of the film fluid. Only knack this reviewer observed were the usage of special effects (which was pretty obvious in most scenes), some of the script was forced to make people laugh and overreacting scenes of Carell. Overall, the sum of its parts were better than the whole. Carrey still has it and Buscemi just …

With such a strong group of comedic actors at it's disposal, Steve Carrell, Jim Carrey, and Steve Buscemi, one could only imagine The Incredible Burt Wonderstone to be a non-stop laugh riot. Unfortunately, this is not the case. While there are indeed several laugh out loud moments. The film makers decide to go with the more 'sweet and heartfelt' route, rather than throwing non-stop hilarious gags at the viewer. Another problem is that it plays it quite safe and predictable, when this film probably could have benefited from a R rating and more raunchy material. Still, as it goes, The Incredible Burt Wonderstone is a good natured story well told with sparkling direction. But with Carrell and especially Jim Carrey (who isn't given enough screen time by half), you can't help but …

Wonderstone has left me split

Iâm actually very split on this one. by that I mean when this movie gets something wrong, Itâs really wrong, and when it gets things right itâs incredible. One part of me really liked it, and the other really hated it.

Comedy is a real issue here, Steve Carrel isnât funny, the laughs are few and far between in this comedy, and that is mostly because Carrel just isnât funny as a spoiled jerk. I always preferred carrelâs dramatic work more then his comedy, and when I do like his comedic roles they are much more restrained then this. He just canât be likable or funny while also being funny so ends up being neither likable nor funny.

Now, when the movie is funny (and it rarely is,) itâs freaking hilarious. Thereâs a bit about bringing magic to starving children …

It looks entertaining - but I'm not sure it's theater-worthy entertainment. I would rent it.

With the likes of Carey and Carrell, I expect a great movie. As so often is the case though, matches that seem perfect can cause a lacking in other aspects of the film. This will either be a masterpiece or a dud.