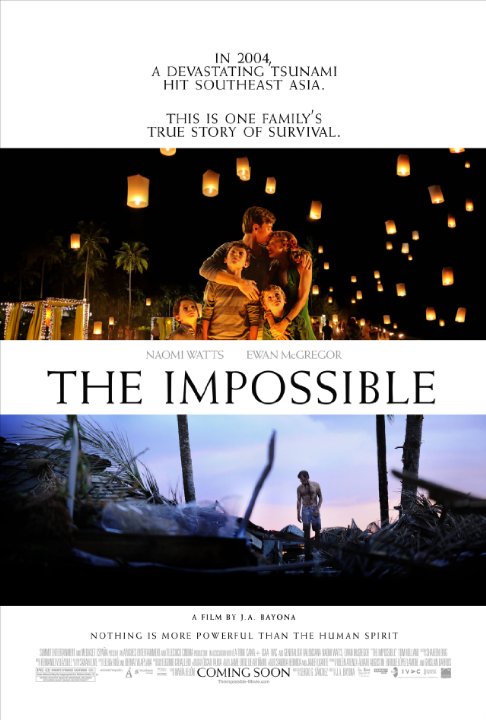 Plot: Based on the 2004 tsunami that hit Thailand, a family is caught up in the chaos of the aftermath with tens of thousands of other people as their sons go missing following the devastating natural disaster. -- Chris Kavan

So it took me awhile to find this but I have to say it has some powerful performances with Naomi Watts, Ewan McGregor and, in his first film role, a young Tom Holland delivering the goods. And despite the uplifting message about survival and hope in the face of disaster, it never feels overly saccharine or too sentimental. Plus the actual tsunami scenes are realistic without holding back. An all-around worthwhile film.

Missing neither tension nor depth, "The Impossible" innovates its disaster movie setup with valuable and powerful messages about kindness, love, generosity, and humanity.

Nothing is more powerful than the human spirit. Okay this movie is a true story well they are some things in this movie that was not really true like the wave itself I mean it looks more bigger then the photos.

An impressive, breathtaking, haunting and frightening movie that I surely won't forget. A very realistic picture about the devastating force that a tsunami can cause and it demonstrates how tiny we human beings are despite our high-tech knowledge when facing natural phenomena .
The title of the movie on its own is already a whopper of a spoiler, but personally I would rather just see this small miracle about a whole family surviving this disaster instead of seeing a movie about the thousands who didn't survive. "Youtube" is full of tragic films,pictures and photos of victims. That this movie was overflown (sorry...) with a Hollywood sauce is perfectly normal. Had they filmed it as realistic as in reality, this would have been the most sickening movie nobody is waiting for. That's why …

I want to start this review by saying that if you are in a time in your life where you think everything is bad have a look at this film as it will make you feel that things aren't really that bad. Definatly the feel good movie of 2012.

When i originally heard via Cnn in 2004 that on Boxing day of all days, that a 30ft Tsunami had hit the asian islands i could not believe my eyes as to the catastrophe that ensumed the eastern peninsula also the death toll was nothing short of astronomical with the huge wave leaving 230,000- 280,000 dead in it's wake. The worst mother nature disaster in history.

The Impossible is based on the true life story of Maria Belon, a spanish physician (Although she was portrayed by english actress Naomi Watts who is nominared for best actress for it) …

"It's a beautiful mystery isn't it?" Intense, moving and powerful. On Christmas Eve the Bennett family spend their vacation In Thailand. A tsunami hits and Maria Bennett (Naomi Watts) and her husband Henry (Ewan McGregor) and their three sons Lucas (Tom Holland), Tomas and Simon get lost in the incident. It has the most horrific/authentic opening disaster sequence on-screen. The hospital was grueling as well. This critic has never grimaced and winced as much on a movie, and this is a drama. Naomi Watts has that ability, to pull you in because of her vulnerability/pain because of the power to convince. McGregor was heart-wrenching as well. It's baffling how the Academy Awards snubbed a picture of this magnitude. Best lines: Maria - "You get to go and do something. Go help …

No posts have been made on this movie yet. Be the first to start talking about The Impossible!