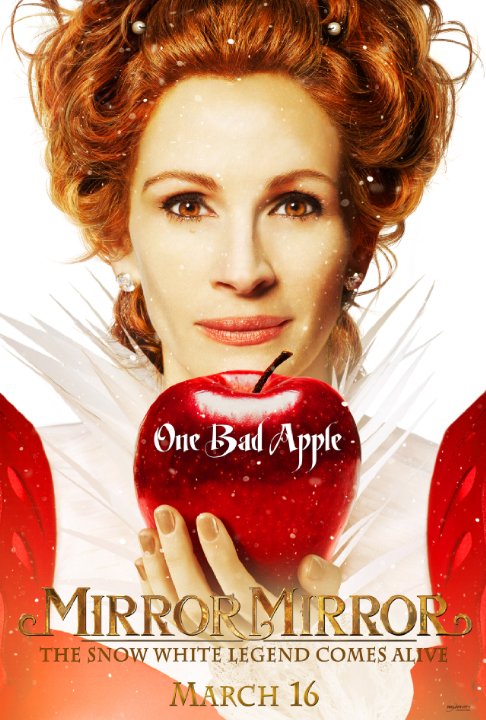 Plot: The classic Snow White fairy tale takes a dark twist when the young woman teams up with seven dwarfs in order to reclaim a kingdom that has fallen into ruin. -- Chris Kavan

Mirror mirror on the wall will this film be the worst peace of crap of them all. Mirror mirror. is one of the worst movie's of 2012.it's just boring and slow and the make-up looks like's something from a Tim Burton film.it has a weak story and a weak plot.

Too safe for its own good - it's like a live-action Disney version of the much darker fairytale. Though it has some visual panache, the story just doesn't work for me. Here's hoping Lily Collins has better luck, I think she has a good future with the right projects. This just isn't the one.

This movie has serious problems and was barely watchable.

Julia Roberts Save It!

Snow White gets away from the palace and witness what the kingdom has become after his father disappeared. She, then, teams up with the seven dwarfs to defeat the Evil Queen.

***
I did not expect that this would be as funny as it was, though I was expecting for something like a "grand" comedy, a "high-end" comedy (if you know what I mean). The film could have been better if the production design was pleasant. The set and even the visual effects seemed to be so low quality, except of course some of the costume and hair dresses which were really stunning if not beautiful. I loved how they put a twist on a classic fairy tale. At first, I thought it would be a crappy one, but as the movie progresses, I started loving the script. One thing that audience will surely love is Julia Roberts …

Not Another Snow White Movie...Please

I wish someone would have hired a huntsman to come after me while I was watching this. Running for my life would have been a much more interesting way to spend those two hours. I'm not sure what's going on with these Snow White movies but they are all lacking. This movie was boring. I hardly cared about anyone in this film. The only redeeming characters were the dwarves, especially the one with a crush on Snow White. I felt like I was watching a pardody that was trying to take itself a little too seriously. I might recommend, because of the bright colors and over-the-top set design, that this movie might be good for a child. But even then I'd be insulting a child's intelligence, because even a child can determine when it's watching nonsense.

Mirror Mirror has a serious identity crisis. What is it, exactly? A parody of the Snow White tale, a modern adaption of the story, a comedy, a drama, a typical triangle romance, etc. Mirror Mirror never truly nails a feel or even a genre, making it feel like a jumbled mess of ideas and thoughts that no one bothered to sort out to make it seem cohesive.

The (curiously un-named) Queen has selfishly ruled the (once again, un-named) kingdom as her own, though it is rightfully Snow White's. Making life miserable for everyone, The Queen issues heavy taxes and outrageous laws to make everything convenient for her. Snow White, however, wishes to do away with The Queen, and restore the kingdom back to the way it was when her late father was king. Through a crazy (and convenient) series of …

No posts have been made on this movie yet. Be the first to start talking about Mirror Mirror!