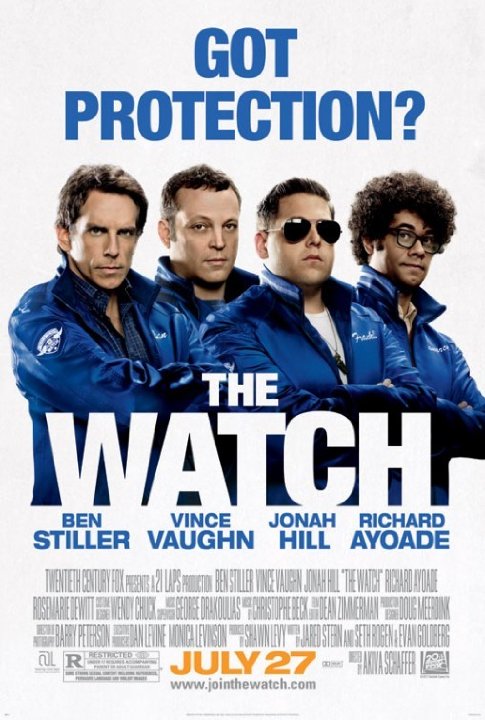 Plot: A group of suburban dads decide to form a neighborhood watch group, mainly to get away from their families and hang out, but find themselves unlikely heroes when they uncover an alien plot to destroy the world. -- Chris Kavan

A cool mix of sci-fi and comedy. Of course, nothing much about the story, I even predicted the twist. But all the cool stuff are fun and entertaining. Stiller-Hill-Vaughn-Ayoade is not bad at all.

The Watch was GARBAGE! The movie trailer looked funny so I think that's what made me want to see it in the 1st place.I guess I should've known it was going to suck when it had 2 of my least favorite actors (Vince Vaughn & Ben Stiller) Jonah Hill was hilarious though & the funniest actor in this piece of crap.There were about 3-4 funny scenes which I can't even remember at all so I guess that tells you how much I think about The Watch.Most of the humor felt forced & I love potty humor & everything but that's all this movie was.I sat through it all just waiting for it to be over & the thing that amazed me most is that I didn't fall asleep 1 time

Well I just watch the watch. The neighborhood Watch. I remember watching the trailer for this movie and it was funny as hell.they are some funny part's in the movie but the rest of it is a big ball of shit.

Evan (Stiller), Bob (Vaughn), Franklin (Hill), and Jamarcus (Ayoade) are neighbors who form a neighborhood watch after the death of an employee at Costco. The branding for Tide was overkill, characters too unbelievable (especially the dumb cop trying to revive his dead partner wherein Bob explains the likelihood of survival after his hearts been removed/Franklin swearing at his mom, etc). The movie reminded this critic of a a mixed poor version Ghostbusters, lousy The Burbs and weaker Super 8. Vulgar and amateurish screenplay in which the direction turns to gross out humor and science fiction was just ludicrous. Lacks appropriate character development for the other leads. It's comical moments was bland and situations were just baffling. On the positive side, the special effects and …

No posts have been made on this movie yet. Be the first to start talking about The Watch!