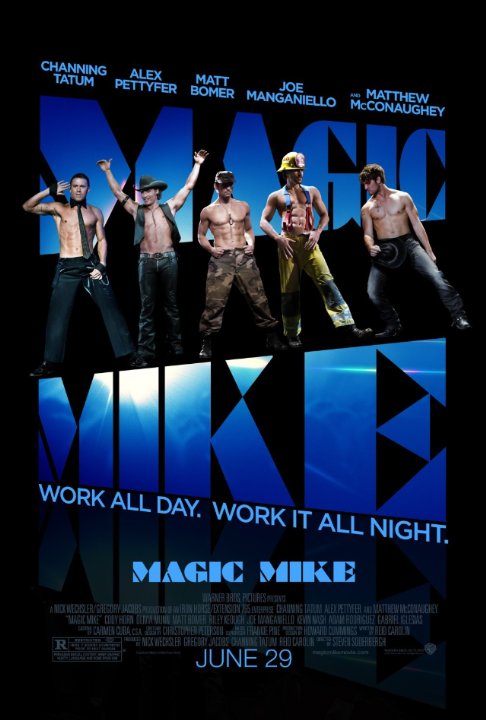 Plot: An up-and-coming male stripper is shown the ropes by some of the more experienced members of this specialized profession. -- Chris Kavan

It sounds strange me liking this movie but I did.

I was expecting a Pretty Woman where the guy is saved by the girl. It is kind of that but more of a dark and grittier version of it. The only problem is the Pretty (Wo)Man story doen't need to be gritty and dark. Over all the characters are likable and the story is good but the end got a little dark for me. Over all it has plenty of eye candy for the ladies and not quite enough story for the guys.

What a pleasant surprise. Yes, I enjoyed this film about male strippers. Never thought I'd say those words, but it's true. 'Magic Mike' is all about the characters: their talents, lifestyle, present and future careers, difficulty in relationships, and the adversities this particular job puts on those things. Some of this may be a little superficial 'movie-like', but I was interested in all of it. That is mostly in thanks to the actors involved. I liked these people. Tatum fits the lead role perfectly. Yeah, it was made specifically for him, but he shines regardless. Things brink on the edge of a dark reality at times. The drama benefits from this. It balances out with the fun moments nicely. We never lose sight of the fact that these guys are entertainers and they are really …

Matthew McConaughey couldn't even save this...

Originally seeing the trailer for this i knew it was about the male stripper trade however despite the content of the film i usually make a point of seeing anything that Matthew McConaughey stars in as he is cooler than the other side of my pillow. Still waiting for a film to be made starring all my faves Daniel Day Lewis, Sean Penn, Mark Wahlberg, Leonardo Dicaprio, Jack Nicholson etc... Anyhow to get rapidly back on track here...the film was another dissapointment of 2012 I can usually ignore not so great storylines however " Magic Mike" made the cardinal boo-boo...pointless storyline! Ok i get that this was about the bromance between the chief antagonists in the film played by both Channing Tatum and Alex Pettyfer, however it still ended with no vaild point being made about the film. …

Definitely not the male version of Striptease since this has more depth in terms of the 2 leads. Not one of best from the Director either. Mike Lane (Channing Tatum) works in a male strip club owned by Dallas (Matthew McConaughey). Adam (Alex Pettyfer) befriends Mike and introduces him to his sister Brooke (Cody Horn). The film focuses on the friendship of Mike and Adam. Choreography was near perfection, soundtrack apt and McConaughey spectacular and committed to his role. Despite the light plot the intent of representing temptation (Adam), admitting ones mistakes/transformation (Mike), and sisterly love (Brooke) was good. Another weak link was Tatum, whose acting just doesn't satisfy in this critics perception while Horn feels miscast with a non-chalant performance. Had some nice humor …

No posts have been made on this movie yet. Be the first to start talking about Magic Mike!