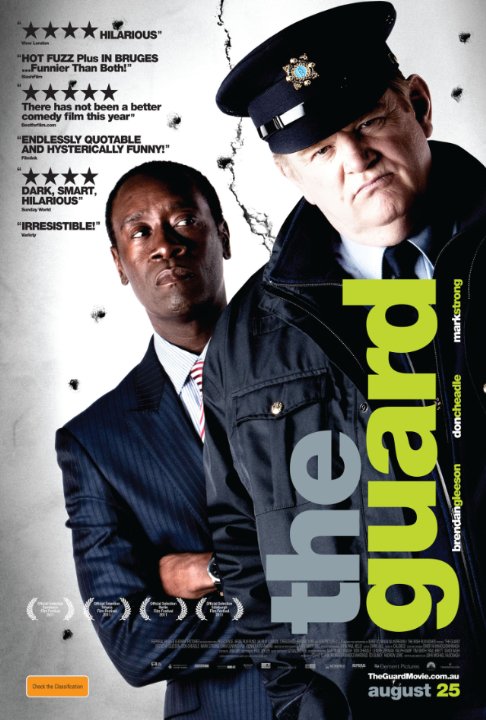 Plot: Sergeant Gerry Boyle is a small-town Irish cop with a confrontational personality, a subversive sense of humor, a dying mother, a fondness for prostitutes, and absolutely no interest whatsoever in the international cocaine-smuggling ring that has brought straight-laced FBI agent Wendell Everett to his door.

It comes at time in my reviews, that I see a movie that many people like but I don't, well this is one of those movies and before anybody thinks that I hate this movie well I don't and here are some good and not so good things in the movie. Brendan Gleeson and Don Cheadle were great in this movie. The directing is brilliant. But as good as Brendan Gleeson acting in the film, his character in the movie is so unlikable and when he is in great danger I didn't give a flying fuck if he got shout or stabbed.

An FBI agent teams up with a small town Irish policeman to investigate drug traffickers operating out of rural Ireland in this amusing fish out of water buddy cop comedy from the brother of Martin McDonagh who wrote and directed In Bruges. The approach and humour is very similar to his sibling's film, Brendan Gleeson exhibiting the same kind of self deprecating and cynical pragmatism that is common to the Irish mentality. As a thriller, the plot is rather simplistic but it is done with a knowing wit that deconstructs the typical Hollywood action film in a way that's like Guy Ritchie meets Father Ted. Very funny stuff and if you liked In Bruges, you're sure to like this too.

Sgt. Gerry Boyle (Brendan Gleeson) and Everett (Don Cheadle) try to capture an international drug smuggling gang. Some of the funny lines from the film: Boyle â âI'm Irish. Racism is part of my culture.â âLike the fat man said, if you have to be careful not to drink too much, it's because you're not to be trusted when you do.â Only qualms this reviewer had are the peculiar dialogue makes you think if there are people who talk like that, unresolved ending (in the special features Cheadle made a funny remark about it) and the few scenes were not related to the plot whic kind of destroyed the mood of the pace. Soundtrack, performances, direction and script were all fantastic nevertheless. The Guard is worth a look for those who enjoy dark comedies such as this critic.

No posts have been made on this movie yet. Be the first to start talking about The Guard!