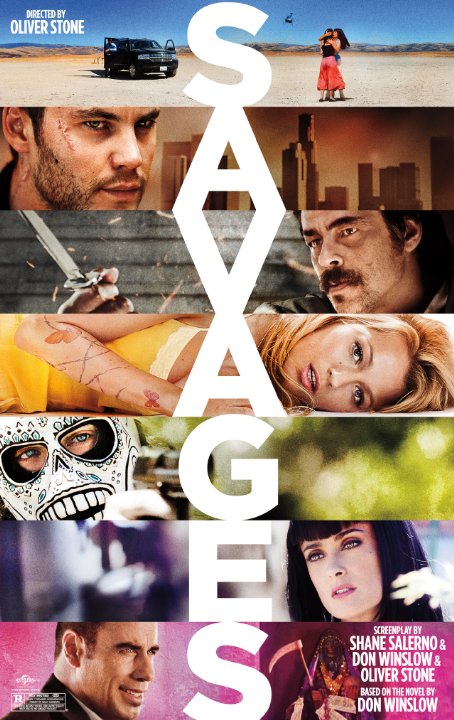 Plot: A pair friends - one a laid-back peaceful Buddist, the other an ex-mercenary and Navy SEAL run a homegrown pot-growing business with their mutual girl, Ophelia. When a Mexican cartel moves in and demands they join their operation, their idyllic life is shattered but they won't go down without a fight. With the help of a shady DEA agent, they hope to win against unimaginable odds. -- Chris Kavan

Kitsch and JohnsonÂ´s hot bodies, Salma "the queen" Hayek and Del Toro. Those things were the best. the movie is so bad that it hurts.

This was just bad but it had a really good photography! Del Toro never disappoints!

Just unbelievably bad. The story is so completely ridiculous and full of plot holes and the subject matter knowledge is lacking utterly. These drug dealers, one of whom is a Navy SEAL, go about taking on a drug cartel and basically beating them by "calling up buddies" who even though supposedly active military, have no problems associating with drug dealers, committing murder in a drug war and just showing up whenever needed. The acting isn't great, the story has so many stops and starts, and at one point it just gets ridiculous where it seems like the director couldn't decide on an ending and tried to do two different stories at once. The villain never gets his justice, and many other loose ends are left hanging. Overall the movie was a huge failure, and a severe disappointment from a …

It is unbelievable the director of JFK, Natural Born Killers and Platoon have directed this type of picture. Chon (Taylor Kitsch), a former Navy SEAL and Ben (Aaron Taylor-Johnson), a Buddist, grow marijuana share Ophelia (Blake Lively). The picture also revolves around Mexican cartel Lado (Benicio del Toro), DEA agent Dennis (John Travolta) and cartel leader Elena (Salma Hayek). The leads Taylor Kitsch, Aaron Johnson and Blake Lively were jut dull. Some scenes prolonged the pace and story. The only entertaining artist was Benecio Del Toro. Nice to see Salma Hayek in a more meaty role. The final shoot-out/twist and turn of events saved this from being mediocre. If only the fancy direction was left behind and focused on the plot and better casting. Savages bores from the first …

There is no same ole same ole about this story

After reading alot of reviews slagging director Oliver Stone's latest effort as being unlike his usual work..another wrote that he whould stick to his normal style of directing that he is accustomed and known for... I personally have watched all of Stone's films and just wonder what in the hell these people mean by normal style? As far as i can remember each and everyone of Stone's flicks were in a style of their own and not one of them share the same flare...so? Needless to say i thought he did a fantastic job on 'Savages' Actually the only thing i wasnt to keen on was the triangular love affair between the 3 main charectors and how the male bff's shared her (in one segment at the same time) sorry that's just a whiff of my old fashionism escaping tis all...Great cast as per usual let's …

No posts have been made on this movie yet. Be the first to start talking about Savages!