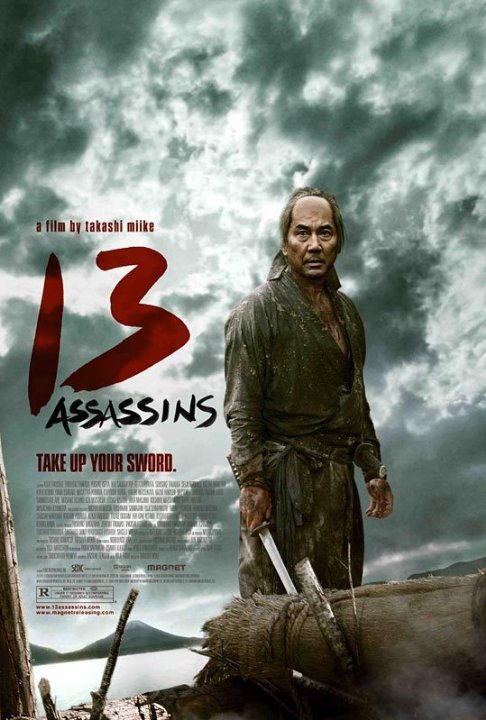 Plot: After an evil warlord threatens to throw Japan back into a feudal warring state, a group of assassins comes together and plot a suicide mission in order to stop him. -- Chris Kavan

The films about a evil warlord threatens to throw Japan back into a feudal warring state, a group of assassins comes together and plot a suicide mission in order to stop him. This movie was not my thing because the movie is slow and the opening was strange. but the sets of the film look beautiful and japan always look goo in movies.

Miike abandons his grotesque pedigree to bring a straightforward story of courage and honor. The acting is minimalistic, but effective. The action and set pieces are, of course, where the film succeeds most, and the forty minute long concluding battle sequence is brutal and impressive. Doesn't have the same gravity of Kurosawa, but still strong.

I normally don't get into historical samurai flicks but 13 Assassins had enough action, drama & the story was interesting enough to keep my attention.I enjoyed it all the way through.I think this is the 1st samurai flick where I didn't get bored & turn it off before it was over

When a brutal sociopath becomes next in line to take power over a then peaceful Japan, a small group of samurai are dispatched to prevent him from reaching his kingdom and taking the throne. Takashi Miike is no stranger to blood and guts and so it was almost inevitable that he would turn his hand to the traditional samurai story at some point in his career, and he does so with a perfect balance between character-driven historical allegory and gritty, blood-soaked violence. Although the template for the story is clearly provided by the Kurosawa classic Seven Samurai, Miike evokes the tone of the likes of The Wild Bunch or Once Upon A Time In The West in portraying a group of men of action who no longer have a place in the world and grasp their last chance for glory or death. It concerns …

Legendary cult director Takashi Miike ("Ichi the Killer," "Audition") delivers a bravado action film set at the end of Japan's feudal era in which a group of samurai are enlisted to bring down a sadistic, murderous lord to prevent him from ascending to the throne and plunging the country into a war-torn future. The 13 assassins track the lord down and lure him into a small town that they have transformed into a city of death, there to battle his 200-man string army in one of the longest -- and most elaborate -- battles ever committed to celluloid. Miike -- generally known for gore and extreme violence -- here tones things down in a mainstream, old-fashioned samurai film that would make Akira Kurosawa proud. Yes, there is bloodshed (particularly at the beginning, when Miike sets up the …

My Top 30 Foreign Films This Century by James

No posts have been made on this movie yet. Be the first to start talking about 13 Assassins ( JÃ»san-nin no shikaku )!