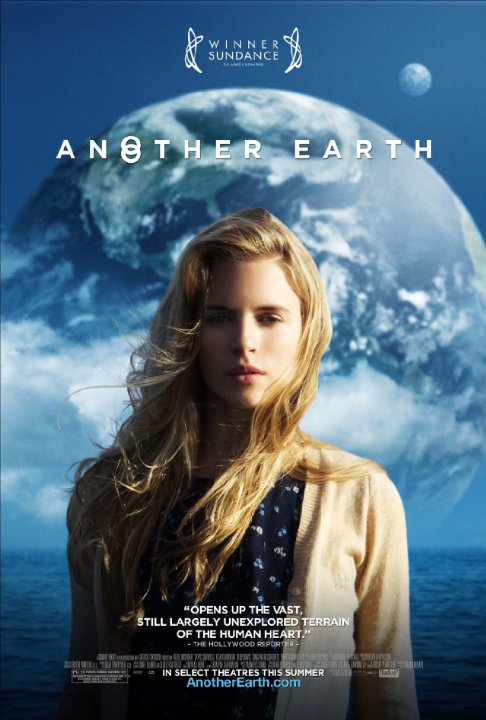 Plot: Against the backdrop of a second planet (dubbed Earth 2) appearing in the night sky, a night out for an MIT student leads to consequences for her and an accomplished composer. -- Chris Kavan

A thoughtful drama with sci-fi elements - the film doesn't use action or special effects to get its point across - words and images serve that purpose instead. You have to get into the story, but once you're hooked, it offers an intriguing premise, an one that makes you think about how one small action can have a radical impact on your life.

I really enjoyed Another Earth. The handheld camera work was beautiful without being jarring, and the long, slow thoughtful shots were enchanting. I loved the fact that there was SO little dialogue and pretty much no exposition, leaving us as viewers to make our own links and find our own conclusions. My heart went out to Rhoda, watching her get deeper and deeper into a situation and not being sure how to do the right thing. Very intriguing ending too.

Better than Melancolia because it was shorter and made more sense. Not too much of a sci fi movie, but had a few very cool/shocking scenes. Acting is superb and I really liked the story. A drama wrapped up in a tight sci fi movie. Squeaks into my current top 10 for 2011 but nothing amazing. Solid.

"Another Earth" by Yojimbo

On the night a planet that seems to be an exact duplicate of the Earth is discovered, an aspiring astronomer kills the family of a noted composer in a traffic accident. After 4 years in prison she becomes his cleaner in an attempt to make amends while dreaming of one day visiting "Earth 2". Another Earth carries all the hall marks of an archetypal indie movie; an off beat story simply told in a faux documentary style, concentrating more on characters and dialogue than action and effects. Like many films of this type, it walks a fine line between the thought provoking and pretentious bullshit and to be honest, Another Earth does cross it a little too often. The premise is intriguing but the idea isn't really explored in a truly satisfying way and the overly self conscious approach gets in …

The sci-fi element in this movie, of having another Earth around, was just a subplot to the story in the focus -- about two people whose lives one horrid accident changed forever -- but that masterfully offered a twist at the end, otherwise not even thinkable. What if there was a chance to change the past? To redeem yourself for things you didn't want to happen but did and therefore have to bear the consequences? This was really extraordinary movie - I really sympathised with Brit Marling character, Rhoda, but couldn't also help myself thinking how impossible her wish was because I felt just the same for Mapother's Burroughs. The forgiveness is one thing really hard to ask in these cases, even when asked from your loved ones. I watched the movie in the expectation of seeing somebody …

Rhoda Williams (Brit Marling) commits a road accident in which the family of John Burroughs (William Mapother) was affected. His pregnant wife and son passes away and Rhoda tries her best to right things. She enters a contest to win a free ticket to travel to Earth 2. Rhoda poses as a maid who gives John a free trial. Some good quotes include from Rhoda â âI don't really want to be around too many people, or do too much talking.â âI don't want to eat the apple of cynicism.â

The film had sincere performances and gorgeous cinematography. You have Rhonda who tries to repent from her immature actions while John searches for escapism from his pain. Some qualms this reviewer had was the following: So much suspense and anticipation was built up about Earth 2 and none were …

No posts have been made on this movie yet. Be the first to start talking about Another Earth!