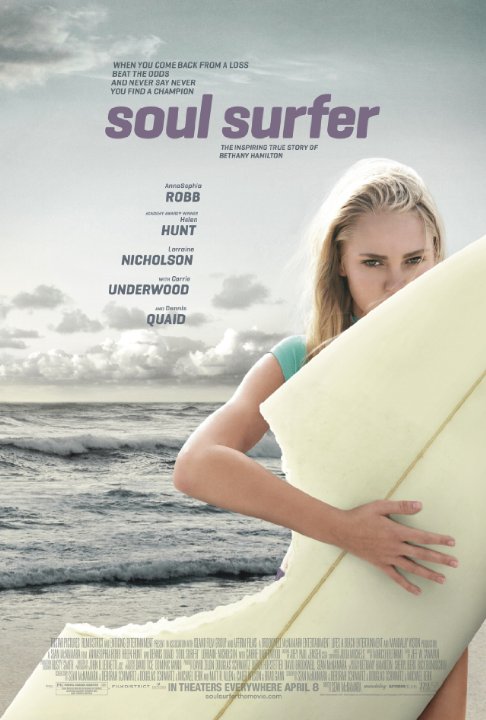 Plot: A young, female surfer battles back after suffering a near-fatal shark attack that results in the loss of an arm. -- Chris Kavan

The film is about a young, female surfer battles back after suffering a near-fatal shark attack that results in the loss of an arm. This movie is not terrible but it's not good either.

After an attack by a shark, Bethany finds herself struggling on pursuing what became her life- surfing. With her supportive family and friends, she will see more of life bigger than the world of surfing. *** One of the best sports-dramas I have seen in my entire life! Obviously, the strength of this film "Soul Surfer" is the story, very inspiring and very moving. The actors performed enough to justify the kind-hearted characters. Good to see amazing and fantastic surfing scenes. I well appreciated every single thing of this movie, except the appearance of Carrie Underwood (hahaha!). No, kidding aside, this film is great as it is. Good film. Must watch!

âIf you have faith anything is possible.â

This movie is based on the book 'Soul Surfer: A True Story of Faith, Family, and Fighting to Get Back on the Board' co-written by Bethany Hamilton and based on her personal experiences. Bethany was a 13 year old aspiring pro surfer who gained worldwide media attention when she suffered the attack of a 14-foot shark and lost her left arm. The film tells of her and her families struggles to cope with the trauma of the accident as well as life that followed including fighting the media, maintaining their faith and Bethany's determination to get back on her board.

Anna Sophia Robb portrays teen Bethany who lives with her mom, dad, and two brothers and is home-schooled in Hawaii. Dennis Quaid and Helen Hunt play her concerned parents and Carrie Underwood (American Idol Winner), in her film …

No posts have been made on this movie yet. Be the first to start talking about Soul Surfer!