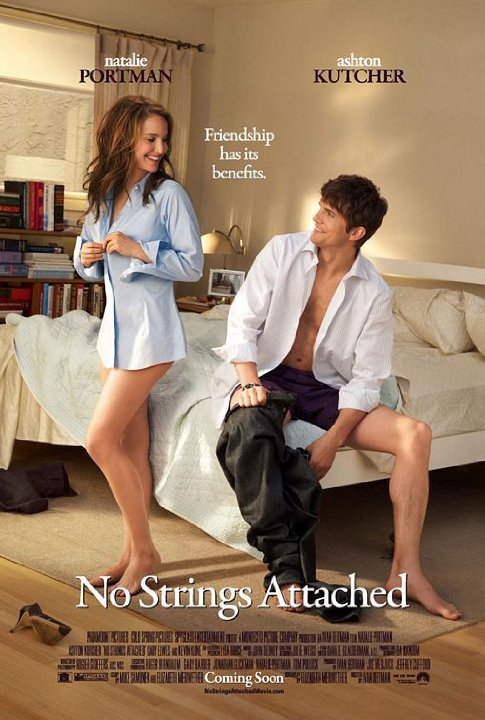 Plot: A man and woman enjoying a physical-only relationship find out that sex may not be enough to satisfy their more romantic urges. -- Chris Kavan

Natalie Portman had a messy list of movies back in 2011.

I liked it! Much better than I was expecting. Friends with Benefits is a little better though. Natalie Portman can do no wrong; she somehow finds something in this material and makes the movie so much more than it otherwise would have been.

Overall this isn't a bad movie, I mean, sure the plot is predictable, and the humor is not suited to everyone's standards, but, in the larger picture, it's worth a watch. In No Strings Attached Ashton Kutcher lives up to his reputation, whilst showing off his fine body, and Natalie Portman, though I've previously found her acting to appear too uptight and forced, plays her role extremely well. To further my negativity, I must add that I watched this after seeing Friends With Benefits...big mistake.

Text Me if You Need Some!

After discovering his father (Kevin Kline) dating his 23 year old ex-girlfriend. Adamâs life (Ashton Kutcher) goes into a spiral. On his way to the bottom, he's reintroduced to a childhood crush, Emma (Natalie Portman). The two have been running into each other off and on for the past 15 years and when attraction erupts Emma agrees to become his bed buddy â insisting that they call it off once one of them develops feelings for the other. The movie attempts to answer these questions: Can two people be "f*** buddies" and leave out emotions? And can their friendship survive? Of course you know the twist here... C'mon guys... they fall in love.

No posts have been made on this movie yet. Be the first to start talking about No Strings Attached!