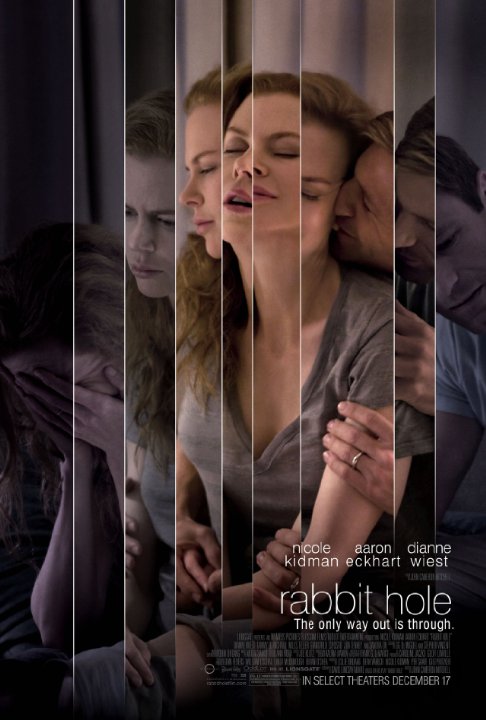 Plot: After their son dies in an accident, Becca and Howie Corbett deal with the death in different ways. While Becca is drawn to the young, teen artist responsible for the accident, Howie loses himself in the past and connections outside of his marriage. Based on a play by David Lindsay-Abaire. -- Chris Kavan

Nicole Kidman gives one of the strongest performances of her career. One of the best films of 2010.

Pretty entertaining for all the wrong reasons. It'd be great to do a MST3000 of this. John Cameron Mitchell is a competent director. Too bad this just isn't his type of movie. It didn't have the verve of Hedwig and the Angry Inch or the character development of Shortbus. Hopefully he learns his lesson and does better next time around. You couldn't expect the actions to come from these characters unless they were insane and demented - and they were not supposed to be. Dianne Wiest gives the best performance, perhaps, especially in one scene where she is supposed to be drunk.

Becca (Nicole Kidman) and Howie Corbett (Aaron Eckhart) are immensely affected after loosing their 4-year-old son Danny in a car accident. Becca's mother (Dianne Wiest) keeps comparing her son who died of a drug overdose to Danny. Becca thinks Izzy (Tammy Blanchard) is incapable of raising a child since she is pregnant. Gabby (Sandra Oh) was left by her husband and takes an interest in Howie while Becca meets Jason (Miles Teller). The serious nature really brought out the skills of Kidman and Eckhart, whose performances were mesmerizing. Dianne Wiest was equally good and had brought out some much needed humor. Score was touching and direction detailed. In this reviewers opinion, Miles Teller was unimpressive, Becca's character was somewhat irritating as Howie was doing everything …

David Lindsay-Abaire's play was beautifully-contrived, controlled, and set in the most rare and precious of places: grief. "Rabbit Hole" delves into coping mechanisms between these two extraordinary people, Howie and Becca Corbett: Howie's attempt to keep things status quo and Becca's attempt to rid every memory of losing her only son to a senseless, faultless accident. After reading the play, I actually expected more from experimental filmmaker John Cameron Mitchell, who could have allowed the brilliant cast to compose the lyrical account of grief for him, but I feel he had too much input into the character development, as well as fixating too much on the outside of the grief, as opposed to the more timbre-oriented inner-life of these magnificent characters crafted by a …

No posts have been made on this movie yet. Be the first to start talking about Rabbit Hole!