Man on a Ledge Movie Information 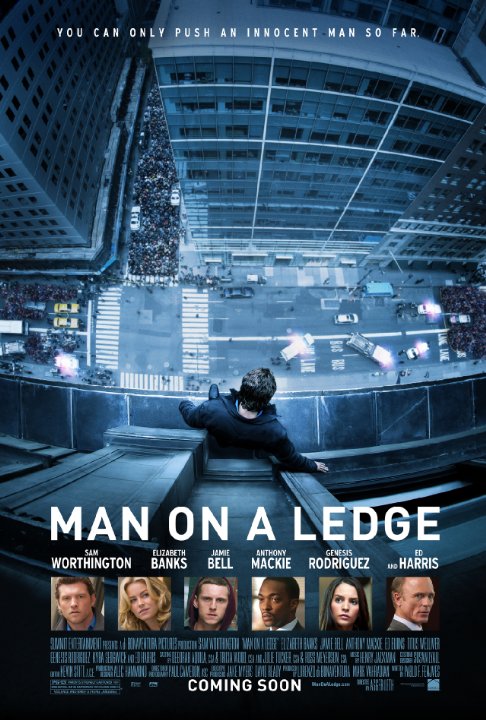 Plot: A former cop and current con threatens to jump from a Manhattan hotel. As the NYPD arrives, along with a personally-requested female psychologist, the stunt is an attempt to divert attention from a massive diamond heist. -- Chris Kavan

An ex-cop and now wanted fugitive (Sam Worthington) stands on the ledge of a high-rise building while a hard-living New York Police Department negotiator (Elizabeth Banks)tries to talk him down. The longer they are on the ledge. This movie is a one of those cliche seen it all before heist movies. The ending of this movie is so stupid and it would not happen in real life and that's when the movie falls about for me. But this is not the worst movie that I ever seen, there some fun parts in the movie.

This movie was really good, on most movies i kind of dose off or get lost for a minute and come back but this had me interested from beginning to end you think its about one thing but it turns in to something else then turns in to something different again very well written the story line was great, i recommend watching this

Excellent! Absolutely excellent! This movie will have you engrossed the minute you press play. It's absolutely an outstanding movie and I am going to watch it over and over again. You'd never suspect any of it. You'd never suspect why he's on a ledge, what his plan is, etc. It's so surprising and awesome! Go watch it please! You won't regret it! I promise

"Man On A Ledge" by Yojimbo

A cop convicted of stealing a priceless diamond feigns a suicide attempt as part of a plan to clear his name. The title of Man On A Ledge gives you some idea of just how little imagination the entire film contains. Every character is a stereotype, every line of dialogue is a cliche, every corny plot device is recycled in what is nothing more than a post Michael Bay conveyor belt Hollywood action thriller by numbers. Stars Sam Worthington and Elizabeth Banks are both feeble, heading a singularly uninspiring cast including Jamie Bell who slums it as the safe and wise cracker and Genesis Rodriguez (!) who supplies the token hot latina T&A. There is literally nothing here that you won't have seen a dozen times before and the whole thing is like a grindingly workmanlike feature-length episode …

Nick Cassidy (Sam Worthington) is an ex-NYPD officer serving twenty-five years in prison for allegedly stealing a valuable diamond from real estate mogul David Englander (Ed Harris). When Nick's father dies he is allowed to attend at the funeral with a police escort but he escapes custody. In an attempt to prove his innocence he climbs to the top floor of a hotel in New York and threatens to jump.

This stunt we later find out is a ruse to divert policeâs attention away from the building across the street, where Cassidy's brother (Jamie Bell) is attempting to steal the diamond he was falsely accused of stealing in the first place.

The police try to coax him down but there's only one person Nick is willing to speak to. Herein enters Lydia Mercer (Elizabeth Banks), who lost the …

While an ex convict, also a former cop, threatens everyone to jump from a Manhattan hotel and gets attention of every single person on the city, his brother is on the move to steel a highly-priced diamond.
***

Brilliant concept! I find it very original and a smart plot. Even if it only revolves around a guy (Sam Worthington) catching everyone's attention so that his brother (Jamie Bell) do the heist everyone unaware of, it made me sit up straight and anticipate everything that would happen. BUT, the downside was, as if the good concept ended up with unrealistic climax and conclusion. *SPOILER ALERT* Jump from tower to tower several feet away, really???

By the way, I should also mention I enjoyed watching Jamie Bell and his girlfriend. =P

No posts have been made on this movie yet. Be the first to start talking about Man on a Ledge!