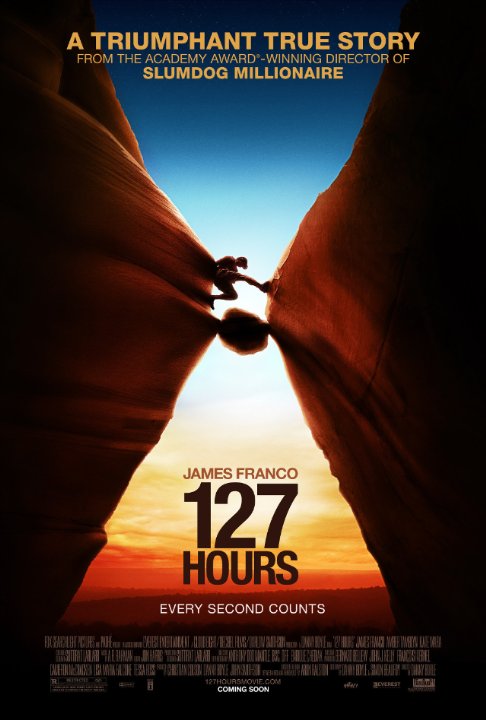 Plot: When a mountain climber becomes trapped under a boulder in a remote area near Moab, Utah, he must resort to extreme measures in order to survive. -- Chris Kavan

Based on the true survival story, "127 Hours" is a gripping cinematic endurance test.

For a move with basically one setting, I was surprisingly captivated. James Franco was great at portraying this guy trapped, going through all the stages of grief. I like to show the clip of him sawing off his arm to new people I meet because their reactions are priceless.

A technically impressive piece of work with an undeniably powerful finale.

Danny Boyle, director of the Oscar-Winning 2008 film Slumdog Millionaire, surprises us with 127 Hours, a short but still full-length film based on a true story about Aron Ralston who basically finds himself stuck in a serious physical bind while trying to hike. That is, his arm is stuck between where he was hiking and a large rock.

Many may think itâs a simple premise and those many are correct. So does this film successfully depict a simple premise in such a short amount of time? Absolutely. First of all, in this movie James Franco IS the hiker. In other words, I felt like this was live footage but still an extremely coherent film with a great acting performance. The fact that it feels so realistic is golden.

Of course, there are instances of gruesome imagery in this movie …

Scooby- Doo where are you?

The story is about a mountain climber becomes trapped under a boulder in a remote area near Moab, Utah, he must resort to extreme measures in order to survive.

Danny Boyle once again proves that he is a fantastic director in this movie. The way he shots and show the trouble that are main character goes through, it's truly great. The cinematography in this movie took the wind out of me it's that brilliant. This is James Franco best role I've seen him. He made me care about his character and he almost made my cry a little a bit.

My only nick picks with the film are the goofy scenes with the Scooby-Doo scene. I'm sorry but that scene came out of no where and lost the serious of the movie for me, and I no his seeing things because his …

A true life story of the thrill-seeking mountain climber who became trapped in a remote ravine without hope of rescue and resorted to amputating his own arm with a pen knife to escape. Danny Boyle once again finds the kind of off beat material he has made his name upon and thanks to some glorious scenery and a fine performance by the ever reliable Franco, he creates a film that is far above the usual "triumph of the human spirit" melodrama. In fact the only real drawback to the whole thing is the fact that the audience knows in advance exactly what is going to happen and therefore there are no surprises whatsoever. That and the fact that although it is embellished by Boyle's usual blend of visual gimmickry and pop music, we are still basically spending an hour and a half watching a guy …

No posts have been made on this movie yet. Be the first to start talking about 127 Hours!