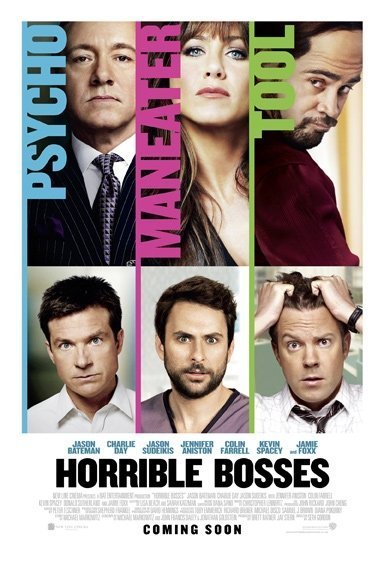 Plot: After realizing their respective bosses are ruining their lives, and happiness, three friends come up with a plan to eliminate them from their lives... permanently. -- Chris Kavan

It's a fun and funny romp with some killer casting and a story just about all of us can relate to. Maybe not every joke hits the way it should, but there's enough that lands to make this a worthy comedy.

Wickedly funny crime-comedy about three hapless friends trying to do away with each others' tyrannical bosses.

After realizing their respective bosses are ruining their lives, and happiness, three friends come up with a plan to eliminate them from their lives... permanently. This movie is funny and silly at the same time.

A laugh riot from beginning to end!

Horrible Bosses rides on the casting of its three titular bosses: Dave (Kevin Spacey), whose seemingly whole purpose in life is to make Nick's (Jason Bateman) life a complete living hell, forcing him to work long hours and endure psychological torture with the promise of a promotion at the end of the tunnel. However, Dave is unequivocally cruel and absorbs the position instead of giving Nick the job. When Nick tries to quit, Dave threatens to ruin his life.

Kurt Buckman has a similar problem at a chemical plant when his beloved long-time employer Jack Pellit (Donald Sutherland) dies, leaving his crazy, cocaine addicted son, Bobby (an almost unrecognizable Colin Farrell) as the new boss. Bobby is just interested in siphoning off as much profit from the business as possible to make his …

Horrible Bosses has a great concept for a movie. I mean everyone bitches about there boss, and everyone wants to do something about it. But no one ever really does. Well what if someone did for a change? This is what the movie is about. Nick (Jason Bateman), Kurt (Jason Sudeikis) and Dale (Charlie Day) are tired of being tortured by their bosses(Kevin Spacey, Colin Farrell, Jennifer Aniston). Quitting is not an option, so with the help of a lot of drinks and some advice from an ex-con named Motherfucker Jones (Jamie Foxx), they devise a plan to kill each others bosses.

I went into this movie expecting a decent comedy, and that's what it turned out to be. Lets start with the acting. The three friends played by Jason Bateman, Jason Sudeikis, and Charlie Day play off each other well. …

Three friends share a common aspect in their careers, all of them have wicked superiors. Nick Hendricks (Jason Bateman) is due for a promotion after working competently for 8 years at Comnidyne Industries only to be overstepped by the vain, insensitive President Dave Harken (Kevin Spacey). Dale Arbus (Charlie Day) works as a Dental Assistant to a flirtatious maniacal Dentist Dr. Julia Harris (Jennifer Aniston). Kurt Buckmanâs (Jason Sudeikis) diligent and ethical chief Jack Pellitt (Donald Sutherland) passes away due to a heart attack and his drug infused sex crazed son Bobby (Colin Farrell) takes over the family business. The underprivileged abused trio seeks advise/help from M. Jones (Jamie Foxx) to eliminate their problems.

A dark comedy that I thoroughly enjoyed from …

No posts have been made on this movie yet. Be the first to start talking about Horrible Bosses!