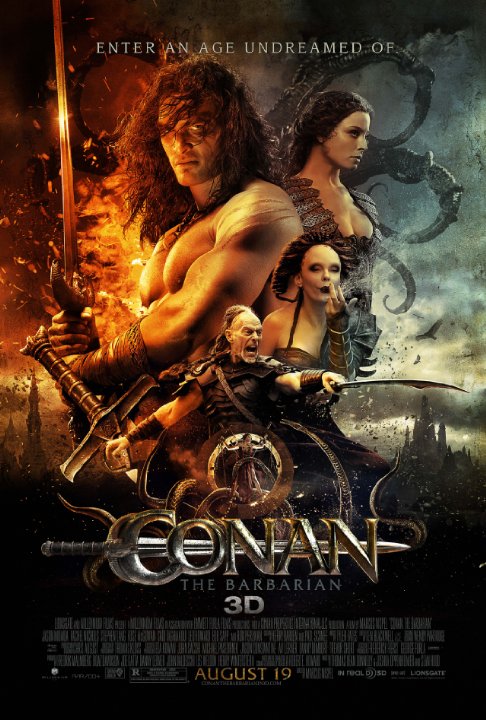 Plot: After the murder of his father and the destruction of his village, Conan the Cimmerian vows to avenge the deeds and travels across Hyboria, finding allies and enemies along the way. -- Chris Kavan

After the murder of his father and the destruction of his village, Conan the Cimmerian vows to avenge the deeds and travels across Hybrid, finding allies and enemies along the way. This movie has mindless gory and stupid characters.

Let's face it - this is not a movie you go into with high expectations. It's all action, Jason Momoa looking angry (I was honestly waiting for him to turn green and go SMASH) and scarred. Rose McGowan is all weird and gothy and too much forehead. It's entertaining, but empty - all bark with no bite.

O.K. there are a lot of Conan movies and they all look the same. Still some times there is a new one that beats them all. This one is not that movie but its not the worst Conan movie I've seen. Are there any good Conan movies? I havend found it yet, but to be frank: I'm not searching for it. So just sitdown, relax and enjoy the hacking and slashing!

Man, is it violentâ¦for one split second I thought I was watching a Tarantino flickâ¦a plus in my book mind you!

The movie opens with a nice gore soaked battle taking place and a grizzled Corin (Ron Perlman) slitting the womb of his wife to deliver his son who would be Conan. Predictably she dies and Corin rises Conan by himself.

Then we see Conan as a teenager. I absolutely loved Leo Howard as young Conan with his pretty yet snarling face. He shows off his slaughter chops as a young teen when he slays a group of hostile growling Tribesmen wielding a sword with murderous aplomb and taking their heads without a qualm.

Being a fan of the original starring Arnold Scwartzenegger I was a little skeptical about watching this version as remakes in my mind usually suck! I'm always glad when i follow my gut instincts and decided to watch the film as i not only enjoyed it i found it better then the original!! And that my freinds is extremly rare! The storyline in the reboot i found told more then its predecessor. Mostly of the beginnings of Conan's life. If you are like me and love movies which pull no punches as far as the gore is concerned then mark this on your must see list asap!!

"Conan the Barbarian" features a boy from a village of barbarians which was attacked by enemies and where his father died right in front of him. And now, the grown-up Conan (Jason Momoa) is all set for a revenge.

Okay. I just saw this movie. I heard of it before but was not able to watch any of its trailer or releases. As I entered on the theater, I didn't know what to expect. There are good scenes, the rest are bad. I didn't like the actors. What I like about this film is that even you didn't have any background of the story, you could understand it easily as you watch it. Though, I thought the whole production was combinations of Pirates of the Caribbean, Lord of the Rings, Clash of the Titans and Prince of Persia DOWNGRADED version.

No posts have been made on this movie yet. Be the first to start talking about Conan the Barbarian!