Catch Me if You Can Movie Information 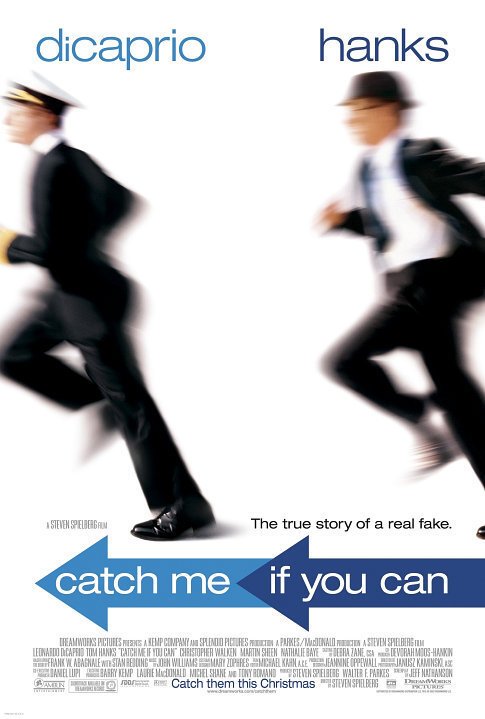 Plot: An FBI agent meticulously tracks a young con artist who always seems to be one step ahead of him whether posing as an airline pilot, doctor, history professor or assistant attorney general.

In a career filled with great performances, here is another one for Leonardo DiCaprio, I like Titanic and Inception more, but this is close behind. Tom Hanks is also great here. Must see.

I find this to be Leo DiCaprio's most fun film. It is a good watch and a cool look into a con man's life. Because Leo's character changes so regularly, you get to see this movie in multiple settings. He is a Pilot, a Doctor, an FBI agent, etc. It is all pretty entertaining. I found Tom Hank's character rather dry and unimaginative, leaving me bored with his side of the movie; this is what keeps me from rating this movie a 3.5 to a 4. Other than that, I can watch this movie as many times as I want and not get too bored.

It's certainly been a while since I've seen a film so easy to like and purely entertaining as Catch Me If You Can. Fun and well paced, though not lacking in intelligence, Catch Me If You Can is ideal film. It doesn't reach the masterpiece status many proclaim it has, but it's a confident and enjoyable ride, that even boasts some surprising emotional depth.

Inspired by actual events, Catch Me If You Can follows the story of Frank Abagnale Jr., who runs away after his parent's divorce at the age of 16. Following in his dad's footsteps, Frank becomes a masterful conman, stealing millions of dollars. However, Carl Hanratty, an FBI agent, is hot on Frank's heels. As Frank continues to successfully evade the law, he also faces difficulties of his own, such as old wounds from his parent's …

"Catch Me If you Can" by Yojimbo

Catch Me If You Can is a lighthearted comedy-thriller based on the life of audacious conman Frank Abagnale Jr who made millions passing fake cheques while he was still in his teens and went on to be one of the most respected fraud investigators in the world. It's a truly astonishing story and with the hugely likable Leonardo DiCaprio in the lead role and Spielberg's sensitive sketching of his homelife you can't help both warming to and admiring the sheer size of the brass set on him. He was living the American dream and if it weren't for the pesky detail of federal crime he'd probably be a national hero. The core of the film is the relationship between he and the FBI agent pursuing him played by Tom Hanks, who puts in a similarly fine performance as the lonely obsessive who mirrors his …

With Steven Spielberg directing and producing, coupled with heavy hitters like Leonardo DiCaprio and Tom Hanks...you can take this movie to the bank, baby! True enough, from a 'lowly' budget of $52 million, gleaning a gross revenue of $352 million ain't that bad . Not at all. I'll do it any day of the week. What really is refreshing though is how Spielberg finally takes a break and floats lightly with this production...sweet and easy for a change...This guy can print money even while he sleeps! The charm of the young DICAPRIO was etched perfectly to portray the biggest check defrauder of all time: FRANK ABAGNALE JR. A true lesson on the underrated value of INFLUENCE. Frank's life was carved to impress his dad. He was commended for his criminal and mischievous deeds since …

No posts have been made on this movie yet. Be the first to start talking about Catch Me if You Can!