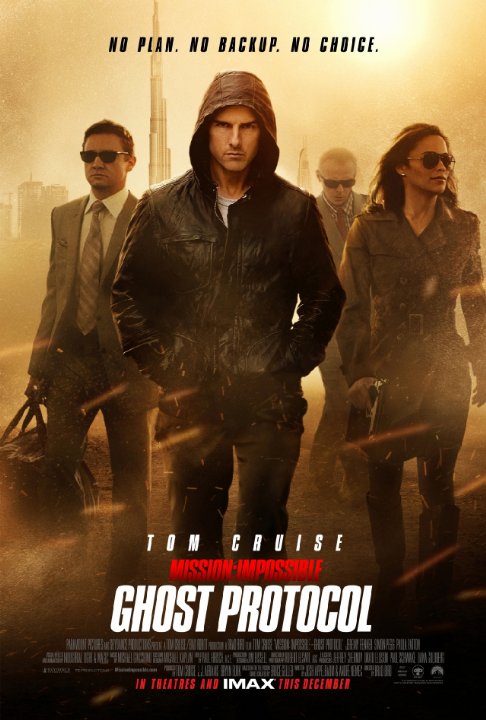 Plot: After a bomb decimates the Kremlin in Russia, Ethan Hunt and his team are shut down and declared enemies of the state. In order to clear their names, the unit must go rogue and discover the true motive behind the bombing. -- Chris Kavan

An "M:I" movie that feels right out of Cold War-era Hollywood, "Ghost Protocol" has a little too much humor thrown into it, but the acton scenes are perfect.

Best mission impossible movie of them all.

Quite satisfying outing from Cruise and co. in the fourth entry in the Mission Impossible franchise. I thought they did a good job of mixing in the action with humor - keeping things tense, while still having a good time. There are some incredible scenes - the story is incredulous to say the least - but it's a lot of fun to watch.

Mission Impossible 3 is the latest installment of a well known spy franchise starring Tom Cruise. In this day and age it seems to be proving harder and harder for people to come up with new movies and while this was a decent movie it was another rehashing of a series that probably could should be wrapped up. Other than the fact that this movie didnât have original characters or an original premise it still had an interesting plot line and captivating action scenes.

The plot begins with a new character being shot immediately on the side of the street with no explanation. Later it is explained. The true main character is found in a Russian prison. The secret agent this movie revolves around, Ethan Hunt is broken out of a prison. After heâs broken out the movie starts getting into …

The IMF are framed for an explosion in the Kremlin and the entire organisation is disavowed, leaving Ethan Hunt and his team alone to expose a fanatic bent on nuclear Armageddon as the true culprit. I've never been the biggest fan of the Mission: Impossible franchise as a whole; the first was okay at the time but looked very dated in the wake of Jason Bourne's re-energisation of the action thriller, the second was typical of John Woo's daft excesses and the third took itself way too seriously to be fun. Ghost Protocol however manages to get the balance just right; the character dynamic works much better than in the previous films, with Simon Pegg's tech geek providing plenty of amusing banter without becoming a comic stooge and there is some quite spectacular stunt work. The plot is once …

Blue is Glue, Red is Dead

When the Kremlin blew up by a bomb, Ethan Hunt (Tom Cruise) and his team become primary suspects of Russian force, if they get caught, they will be declared as terrorists and enemies of the state. Their only way to get out of this was to expose people who are really behind the bombing.
***

I am not really sure if I saw the previous three installment of this movie, but anyway, I kind of disappointed yet satisfied with this MI film.

THE DISAPPOINTMENT: Nothing really special with the story, not smart as I assumed before seeing the film, even the twist on Jeremy Renner's character did not work well.

THE SATISFYING: I love the characters, all with humor and fun to watch acts especially William Brandt's (Jeremy Renner). The actions, running, chasing, climbing, car bumping, the sand …

If you think about it, all of the Mission Impossible films are over-the-top action. &amp;nbsp;None of the action in them is grounded in reality, yet we accept it as part of the story because it's all meant as the usual escapism. &amp;nbsp;And generally with sequels, the action gets bigger anyway.

Snoogans - can you give some examples?

I'm fine with over-the-top action, just as long as the film supports and sustains it.

i can't really compare this one to Mi: 2 because John Woo, kind of wanted to go over the top and do a cheesy film, which that one was very corny. But i actually enjoyed mission impossible 3, but mostly because im a huge Phillip Seymour Hoffman fan, and from the looks of the trailer, it still seems to have the over the top action, probably cheesy dialogue but i feel like that is what this franchise has always done. It'll be nice to see Jeremy Renner in this one too, maybe he can bring this film &hellip;

Yeah it looks really good. But, might be a bit too over the top, like 2 was. Audiences now days want something raw and real, not unlikely crap. Please tom cruise, get it right this time!