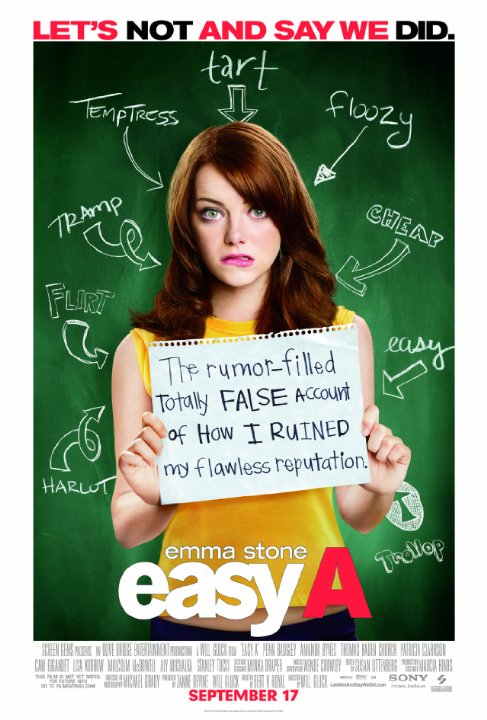 Plot: A teacher's pet manipulates the school's gossip mill and her own reputation to greatly increase her social and economic standing. -- Chris Kavan

Not a great comedy but a charming one

Has easy as pie.

Easily one of the worst I have ever seen. I never turn a movie off halfway through. I dd with this one. I was not and am not curious to see if it got better. This movie has literally tarnished my interest in Emma Stone movies. Her voice gives me panic attacks now, after having to here her narrative more than any other dialogue. BURN IT! BURN IT! SEND IT TO HELL!!!!

Olive (Emma Stone) creates some lies about her sexuality and becomes this way popular....
I did not expect much of this movie expect much of this movie but a funny ride. And so it was. Not something extraordinary but still good and entertaining. The direction is perfect but the story is really, really weird. Still the movie was not bad. Emma Stone delivers a splendid performance and the rest of the cast does so too. The characters were all good explained and developed. My favorite character was the father of Olive(Stanley Tucci) he is great and funny. The role really fits to Stanley and I think he should do some more roles like that. The teachers in this movie were not the usual "hollywood-teachers" (e.g. Bad Teacher) they were a bit like real teachers.
On the whole I had a nice time …

Olive Penderghast (Emma Stone) lies about her sexuality to her best friend Rhiannon (Alyson Michalka). A religious Marianne (Amanda Bynes) spreads what she overheard between the conversations of Olive and Rhiannon. Todd (Penn Badgley) doesn't believe what people say and gets close to Olive. Soundtrack was upbeat and direction was splendid. Emma Stone did a fabulous job, which made the film interesting. Humor was spot on despite the thin plot. Laugh out loud scenes would be the supposed sex scene with Brandon, parents discussion with Olive and the religious group discussion. Screenplay was witty with lines from: Olive - "Whatever happened to chivalry?" Mrs. Griffin - "Olive, life is full of choices. I made a bad one." It was a nice touch complimenting John Hugh's pictures. Easy …

Emma Stone stars as Olive, a good girl who is almost completely unnoticed at school. That all changes when she's coerced into fibbing to her best friend Rhiannon about losing her virginity to a guy she made up. Her white lie is overheard by stuck-up Christian snob Marianne (Amanda Bynes) and it soon spreads like wildfire around school. Suddenly, she's the school slut.

However, she realizes that she doesn't really mind the attention so when bullied gay classmate Brandon (Dan Byrd) asks her to do him a favor and help spread a false rumor that she slept with him she feels morally obligated to do so (which furthers the rumors about her). More outcasts come to Olive for help and with a little cash incentive as well as pity she keeps helping them. Olive decides to embrace her newfound …

No posts have been made on this movie yet. Be the first to start talking about Easy A!