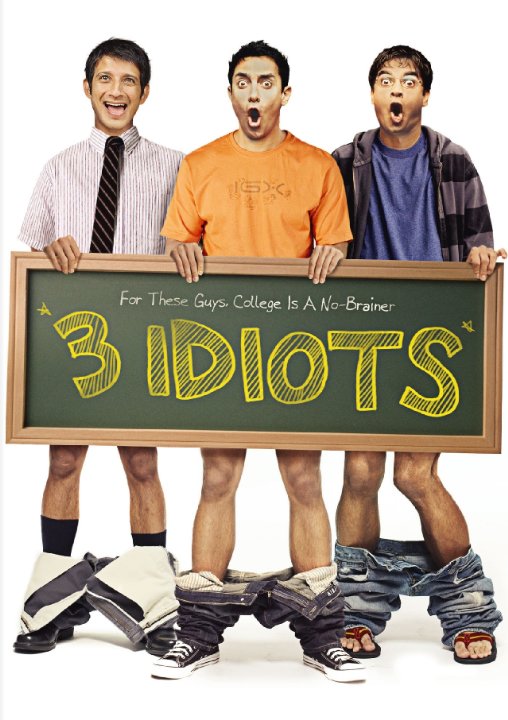 Plot: Two buddies, on a quest to track down their old college friend, manage to get caught up in 10-year-old bet, crash a wedding and then a funeral. -- Chris Kavan

one of the best indian movie ever made.. it talks about the education system in india.. a must watch...

Everything is in this movie! not liked, but loved! :D

At times, this Indian comedy is a little too ambitious, resulting in somewhat of a sprawling plot. However, when it all comes together in the last third or so, it is brilliant. It features some very energetic and captivating performances from an all-star cast and a charming and funny story that affirms life and friendship. For anyone who's ever had a group of friends that you've been through thick and thin with, 3 Idiots really pulls at the heartstrings, when it comes to portraying a trio of buddies who will do anything for each other. Oh, and I laughed a lot.

This Bollywood comedy somehow got overlooked by the mainstream film review press in the states and it's a real shame. There's an infectious, devil-may-care boyishness about this story that follows the college antics of three young men working their way through one of India's most prestigious engineering universities. Frahan (Madhavan) and Raju (Sharman Joshi), led by the rambunctious outsider, free-thinking rebel and super brain Rancho (Aamir Khan), proceed to turn things upside down for the other students -- and the arch-conservative dean, dubbed "Virus" -- as they play prank after prank and continually test the limits of the strict Indian social system. The film begins with Frahan and Raju going on a quest to find their missing friend 10 years after graduation, and the film is told in …

This reviewer was totally surprised with the overall movie despite looking at the subtitles and dance numbers. Highly entertaining than the fairytale like Slumdog Millionaire. It can be a source to make your day brighter. A story of 3 friends taking up Engineering Farhan Qureshi (R. Madhavan), Raju Rastogi (Sharman Joshi) and Ranchoddas Shamaldas Chanchad "Rancho" (Aamir Khan) at Imperial College of Engineering (ICE). Farhan dreams of being a wildlife photographer but is resistant in pursuing his dreams because of his strict father. Raju hopes of becoming the breadwinner but lack the resources. Rancho is the carefree but shy romantic who gives advice.

The dialogue was surprisingly witty. One of many great lines: Farhan â âMost of us went to college just for a degree. No …

No posts have been made on this movie yet. Be the first to start talking about 3 Idiots!