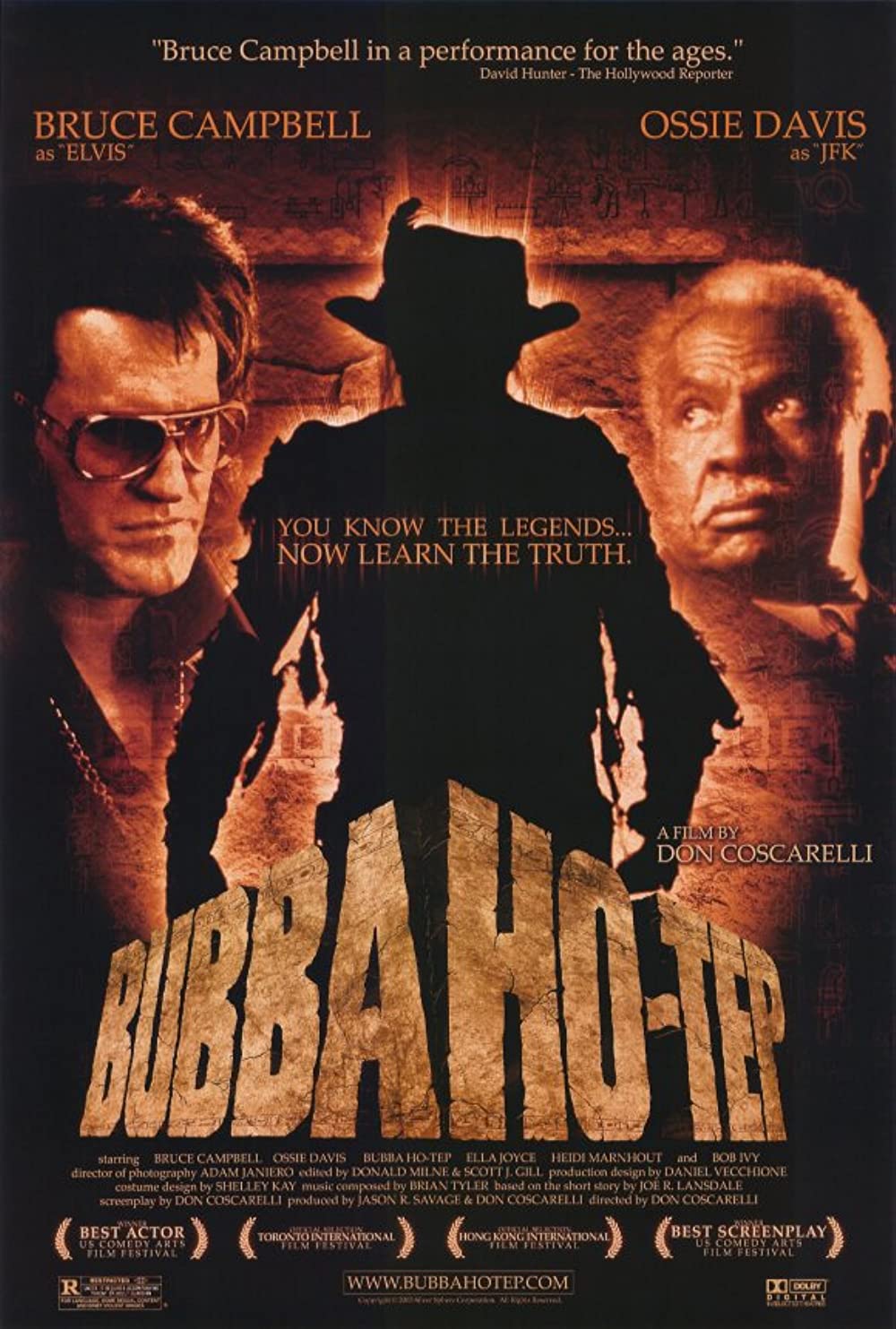 Plot: Two men in a nursing home who claim they are Elvis (Campbell) and JFK (Davis) battle delusions and reality as they try to save their fellow nursing home companions from evil.

Elvis Presley is alive and well (well, apart from a growth on his pecker) and living in a rest home in Texas. Until, that is, an evil mummy comes back from the dead to suck the souls of the residents through their ass-holes, so he enlists the help of John F. Kennedy (who is now old. And black. "They dyed me!") to battle the fiend...Sounds ace doesn't it? But the fact is, that's about it. There is very little else to it apart from those initial gags which hang on a plot borrowed from a weak episode of Buffy The Vampire Slayer. Of course, it is fun watching Bruce Campbell impersonating Elvis on a Zimmer frame, but that starts to wear a little thin after an hour and a half. Fun, quirky, but about as substantial as wet toilet paper.

The absurd story and characters are uniquely entertaining. I enjoyed the performances and the comedy. A refreshingly original and fun cross genre flick.

Elvis Presley (Bruce Campbell) grew tired of the demands of his fame/money and switched places with an Elvis impersonator named Sebastian Haff. His friend is Jack (Ossie Davis) who insists he is President John F. Kennedy, claiming to have been dyed black after the assassination, and abandoned by Lyndon Johnson in the same nursing home. Both try to defeat an Ancient Mummy lost due to a storm in East Texas who gets the souls of people in the home.

Jack âPres. Kennedyâ â âNo time for regrets, Elvis. We were the best fathers we could be under the circumstances.â Elvis â âHere I was complainin' about loss of pride and how life had treated me, and now I realized... I never had any pride. And much of how life had treated me had been good. The bulk of the bad was my own damn …

So bad its good.

First of all there is no possible way to describe this movie without it sounding absolutely horrible. Elvis and JFK are still alive except everyone believes that Elvis is an impersonator, and JFK had his skin dyed black and a bag of sand put in where he was shot. Now the two are in a nursing home where a 10,000 year old mummy is hunting and feasting off of the souls of the elderly. Its up to Elvis and JFK to save the day.
See what I mean? Sounds awful. But considering it is a Bruce Campbell flick could you ever expect him to do something less poignant? The movie is loaded with funny bits. This is a classic B movie. Its one of those so bad its good kind of movies. When I first saw it I was among those saying, wow this is lame and stupid, and it does take a second or 3rd viewing to …

No posts have been made on this movie yet. Be the first to start talking about Bubba Ho-Tep!