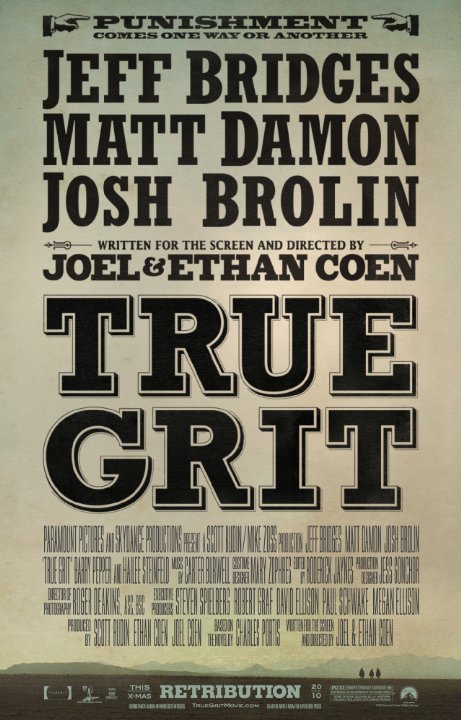 Plot: The Coen Brothers' take on the classic western: A grizzled U.S. Marshal and stubborn young woman join forces to track down the men who murdered her father. -- Chris Kavan

It's rare to see a remake as enjoyable as this one.

The Coen brothers did it again.

The Coen Brothers did it again, they remade an old John Wayne movie and did a great job at it. The violence wasn't too bad, it was just right and Jeff Bridges who plays Rooster Cogburn did the best acting job I have seen in a very long time in modern day movies. The cinematography was just excellent, I forsure give this move 9 guns out of 10 guns. Good job Coen Brothers at making one of the best westerns my eyes have ever seen.

A fourteen year old girl employs the talents of a grizzled old US Marshall to track her father's killer. The Coen brother's re-imagining of John Wayne's western classic is actually not as different from the original as you'd expect. The biggest difference is in its lack of bravado; Bridges' Rooster Cogburn is more of a crotchety old has-been than The Duke's larger-than-life portrayal and the spectre of Death permeates the film in a similar way to Jarmusch's Dead Man. Even the teenage Maddy (impressively played by newcomer Hailee Steinfield) is not immune to its touch, as we see when she beds down for the night in an empty coffin nearly as soon as she appears. The melancholy epilogue is another nice touch and the ending in general I felt worked much better then the first film. I would …

A story of a 14-year-old girl (Hailee Steinfeld as Mattie) on the verge to avenge his father's death with the aid of US Marshall and Texas Ranger. It stars Jeff Bridges (Rooster with his really thick accent) and Matt Damon. The cinematography was strategic, the dialogue witty and humorous at times. Jeff Bridges really shines on this film. In the words of Mattie Ross: âYou must pay for everything in this world, one way and another. There is nothing free except the grace of God. " Words of wisdom from a brave girl beholden of Roosterâs efforts. An entertaining western that can be appreciated by film lovers who dig the genre and the directors mastery in weaving a good story. …

The best western since Dances with Wolves (didn't care for Unforgiven). Virtually every detail in this movie is not missed. The pacing is good, the dialogue is witty, and acting is near perfection. The Coen Bros have done it again.

The story is kind of unique but definitely a western. When a 14 year old girl's father is murdered and she is the one to hire a gunslinging Marshall, you know that this could only happen in the old west. The choice to play the 14 year old girl was perfect. She is a good actress and may have a promising career ahead of her. The subtle twists and detailed cinematography keep you on your seat.

Acting by Bridges is great. This may be his best performance (ok, not better than The Big Lebowski). It is very funny at times, serious at times, real at times and …

No posts have been made on this movie yet. Be the first to start talking about True Grit!