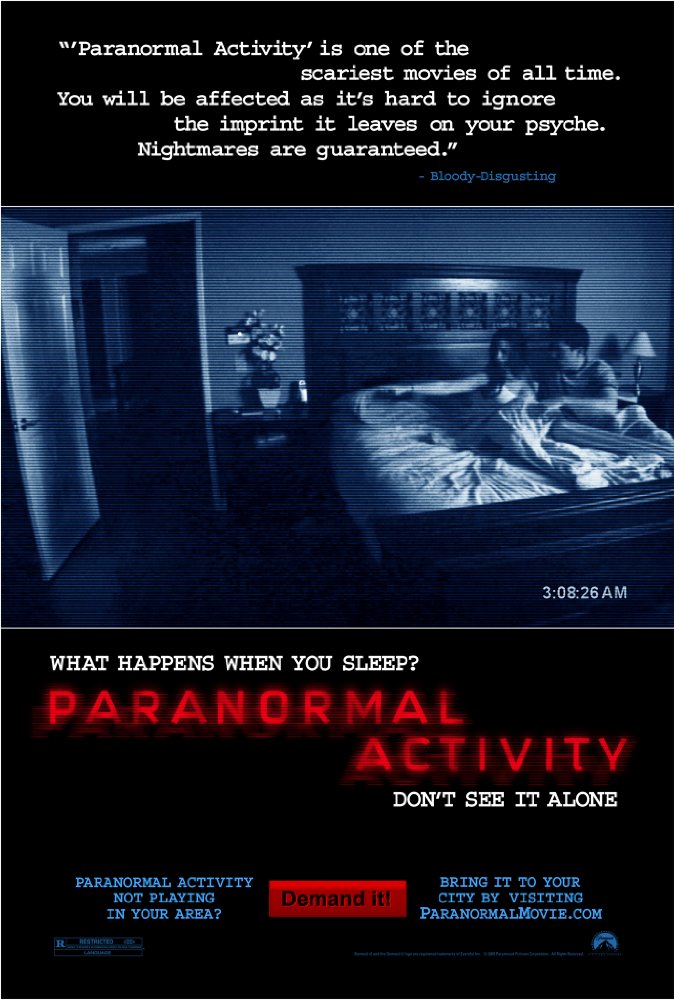 Plot: A couple moves into a typical suburban tract house, but soon begins to experience strange phenomena at night. Setting up a video camera, they hope to capture evidence of the force, demonic or otherwise, that is terrorizing them. -- Chris Kavan

While the experience is real, knowing how fake the whole film is ruins it.

I couldn't stand this boring, unoriginal and completely predictable knock off. Same story as every other modern horror film. Same cheap scares (you know, the tense music, then a cat jumps out screeching for no apparent reason...) just a huge waste of time.

I thought this was going to be better but I honestly didn't think it was scary at all. I liked the 2nd and 3rd ones much more.

A young couple decide to film themselves at home in the hope that it will shed light on a series of unexplained incidents. Yet another dreary, pointless entry in the Blair Witch-style wobbly-cam canon, Paranormal Activity is a pseudo documentary cataloguing a series of bumps in the night as two mildly irritating middle-class Americans are plagued by a pesky home invading demon. In its defence, the protagonists are reasonably naturalistic, the casting director thankfully steering clear of the supermodel-cum starlets that usually adorn this type of thing, although the spookiest aspect of the film is Micah Sloat's resemblance to a young Freddie Mercury. There are still plenty of opportunities for the director to have Katie Featherston and her ample cleavage run around in her underwear while …

Katie and Micah are haunted by a supernatural occurrence in their home. Katie hires a psychic, Dr. Fredrichs (Mark Fredrichs), who assesses that she is being haunted not by a ghost, but by a demon. Itâs funny how the couple always leaves their door open as if persuading the demon to do its thing in front of the camera. Not sure why Dr. Fredrichs mentioned that they couldnât do anything even if they left the house. Alternate ending was not as scary as the one on the film. This hand held film was way scarier than Blair Witch Project and could have been in this reviewers top horror list if it was better planned in terms of realism instead of having somewhat illogical characters and a few overlong dull moments. The thing about this documentary style of filming is that you don't …

I was one of those fools who "demanded" Paranormal Activity during it's campaign for mass release. Well, you know what they say about hindsight.
I went into this movie wanting to be scared. I saw it on Halloween. I love Halloween. I basically wanted to pee my pants watching this movie, or at the very least have to sleep with my light on for a few nights. Instead, I spent at least an hour sitting through a boyfriend videoing his girlfriend and waiting for something to happen other than watching them sleep and brush their teeth. Like, seriously. Nothing happens until the last 15 minutes of the movie and of the last 15 minutes, there's only one thing that impressed me at all- the scene many others have mentioned, the girl getting dragged out of bed. That part's pretty cool, but not worth …

No posts have been made on this movie yet. Be the first to start talking about Paranormal Activity!