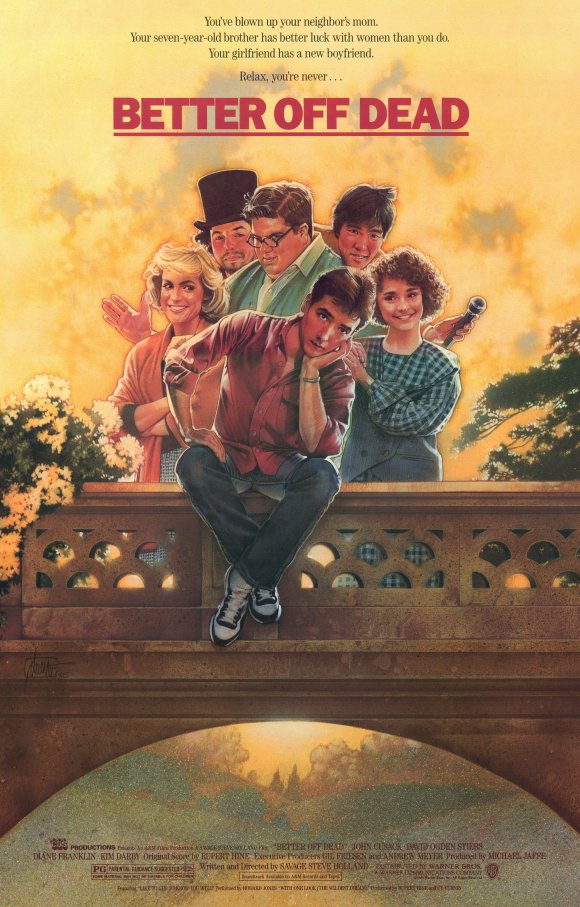 Plot: Layne Meyer (John Cusack) has just lost his beautiful girlfriend Beth (Amanda Wyss) to the most popular and best looking guy in school...who just happens to drive a really nice car also. Well, Layne has decided he's going to get Beth back by getting a job, getting a nice car, and winning the ski race down the feared K-12!

It's not just that this movie was bad, it was also boring. I can handle a bad movie as long as it's somewhat entertaining but I was checking my watch the entire time. And honestly, it was just really stupid; I have no idea how it got such a decent score on rottentomatoes.

It's an 80's teen movie, a zany farce and black comedy all in one. Somehow, all of these elements work together to create a somewhat unique and very funny comedy that is very reminiscent of the decade it was made in. Good fun.

I guess John Cusack hated this movie, but I, for one, love it. It's a perfect blend of 80's nostalgia, dark comedy, and absurdist elements. Think of it as a teen After Hours, where things don't necessarily have to make perfect sense to be funny. Definitely a memorable experience that can be watched over and over again.

Lane Myer (John Cusack) was replaced by his girlfriend Beth (Amanda Wyss) for a captain of the high school ski team, Roy Stalin. Myer gets close to a French foreign exchange student named Monique (Diane Franklin). A few nice lines from Monique: âI think all you need is a small taste of success, and you will find it suits you.â and Lane â âNo, tentacles. N-T. There's a big difference.â "She only speaks French, Roy. She doesn't speak imbecile."

The film had a few absurd scenes like the kid asking for 2 dollars on top of the car and a coincidental fall from the bridge in a garbage truck. It had some cheesy scenes as well though the humor was really good. Soundtrack was vigorous and direction was well constructed mixing clay animation, comic strip animation and adding a …

"Better Off Dead" by Yojimbo

A high school student loses his girlfriend to an obnoxious jock and sets about winning her back. Better Off Dead is a clear attempt to jump on the John Hughes bandwagon, containing the same mix of half-hearted surrealism, "growing pains" and nerds vs jocks storyline. Some of the jokes have stood the test of time, but the majority has not fared so well. It's all a bit too obvious (the ever likeable Cusack argues with his own cartoons, bad-cook-mom's food crawls off the plate etc etc) and the whole "learning to love the hottie under my nose while I'm trying to win back the bimbo" formula is beyond tired. A bit amateurish and very dated, this film probably stirs fond memories from people who saw it at the time but a re-visitation reveals it to be little better than Saturday morning sitcom …

Comedy at its best

This was most definetely one of the funniest and memorable movies for me. I know this movie line by line. It was not a masterpiece by far, but it was just a great flick. This is why I became a fan of John Cusack. There is actually a cop where I live named John Cusack. But anyway, back to the movie. Every character in this movie was developed well. There was the crazy looking teacher from "Ghost", the boy who's mother blew up her face, the two-dollar kid, and the two Japanese sporting announcers. But overall, my hat goes off to "Booger", Curtis Armstrong--he was funny as all hell as the best friend. Not too many people came out of this movie, which is a shame, they were all good. The guy plays the mailman, played another mailman in a different movie as well. I even devoted a …

Movies I Own by Jen

No posts have been made on this movie yet. Be the first to start talking about Better Off Dead!