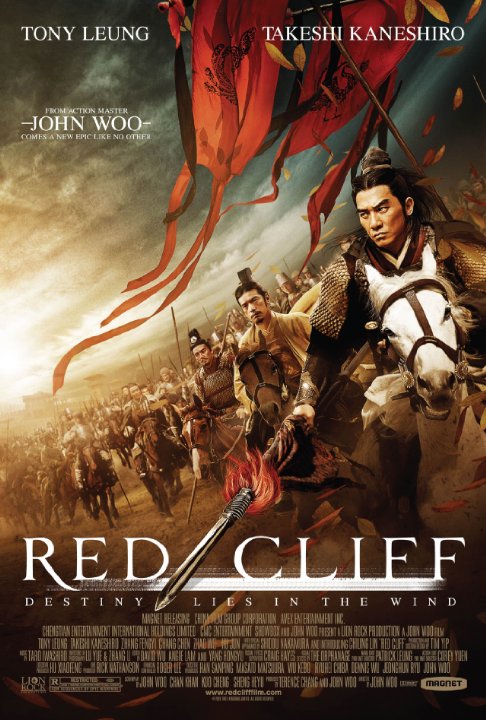 The appealing visuals and epic battle scenes make "Red Cliff" worth your time.

There's too many characters to remember and Western audiences will likely remain unaware of the historical battle's significance to Chinese history even after making it through the movie. However, the scale of the production, the massive battle sequences, and John Woo's more seasoned direction of the plot makes it an interesting epic. There are enough individual moments of ingenuity and plenty of visual spectacle to satisfy those that are curious.

A tremendous epic battle of three kingdoms. Due to the bountiful figures, some background development were missing. The games, musical solo and some conversations prolonged the film. The overloaded cast was somewhat difficult to follow. Spectacular cut scenes, overhead, slow-motion and wide camera shots. One of the highlights was the ambush and opening portion. Boasts probably one of the best battle sequences on the big screen. On the positives, the action, location, costumes, soundtrack, screenplay and acting were impressive. Some provocative lines: "It seems that war is inevitable." "United no one can pull us apart." "I hate arranged marriages, women being pushed around." Overall, a good movie from the action aficionado director John Woo. Red Cliff shows themes of loyalty, …

Red Cliff is an epic retelling of the battle of Red Cliffs in which a power hungry politician attempts to invade the peaceful lands of the south to unite the kingdom under his personal rule. Although clearly a historical epic, the film I was reminded of the most whilst watching Red Cliff was The Two Towers, mainly because of the fact that it is pretty much just one huge battle sequence in which two vast armies of pixels kick the crap out of each other. It's basically the story of a game of military chess between two strategists rather than anything as mystical and romantic as Crouching Tiger or House Of Flying Daggers, and as such it is much more of a "boy's film". Woo does in fact try to inject some of this sweeping romanticism, but it falls short of Ang Lee's poetic vision because it …

If you haven't seen this yet, make sure to look for the full version. It's in two parts and has "Original International Version" on it. There's another version that was condensed for Western audiences. This is usually labeled "Theatrical Version." The short one isn't bad; it's just that it's missing a lot. Imagine if someone edited the Kill Bill movies into one two-hour film. You'd probably end up with something that's still better than most stuff out there, but it would be missing so much. That's how I view the versions of this movie.

To confuse matters further, you can only get part one of the original version from Netflix right now. They used to send both discs together, then you had to order them separately. Now they don't even offer the second disc at all. You can stream the …

No posts have been made on this movie yet. Be the first to start talking about Red Cliff ( Chi bi )!