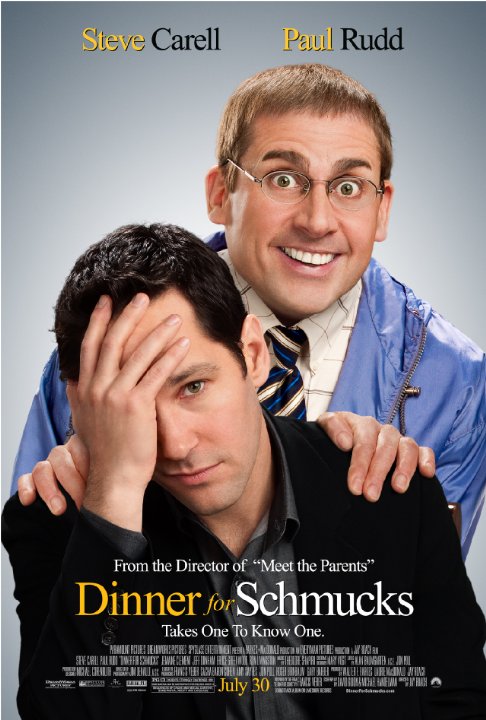 Plot: B.Y.O.Schmuck. A rising business executive is offered a coveted office suite... if he brings the biggest schmuck to the monthly dinner party held by his boss. To rise to the top, he must first sink down to the bottom of the barrel of characters.

The story is about a rising business executive is offered a coveted office suite... if he brings the biggest schmuck to the monthly dinner party held by his boss. To rise to the top, he must first sink down to the bottom of the barrel of characters. This movie is like a unfunny ass-hole at a party know ruins ever joke that one funny person is telling, and that's this movie. The jokes in this picture felt a bit off and lazy if I must say and the cast are all wasted like Steve Carell which I know his better then this, pulls off a terrible role in this movie.

This movie is worth the watch if you are fans of Rudd and Carrel (Like Me). It was funny at parts; but the situations were almost too painful to watch.

As much as I wanted to like this movie, the laughs are too inconsistent for it to succeed as the absurdist comedy it wants to be. The main bright spot is Steve Carell's optimistic portrayal of Barry, a good-hearted idiot who only wants to help his new friends out. Some of the other supporting appearances are fun, particularly Zach Galifianakis's weird creation, but the film doesn't quite string together enough jokes and heart to feel cohesive.

It's not as bad as they say!

The plot revolves around Tim (Paul Rudd) an exec desperately looking for advancement at his business in order to impress his girlfriend (Stephanie Szostak) who he continually asks to marry him, and even carries around a ring for. When given the chance of a promotion, Tim jumps at the chance to impress his bosses. He learns that this includes attending a dinner in which employees pride themselves in bringing the biggest idiot they can find, for the amusement of upper management. The person whose guest is the "worst" will snare a trophy AND be a top dog at work. When Tim tells Julie of the dinner, she is appalled and asks that Tim not do such a despicable thing but he can't resist the opportunity when the very next day he bumps into a prime candidate; IRS employee Barry Speck (Steve …

Dinner for Schmucks is a 2010 comedy film, and a remake of the French play Le DÃ®ner de Cons. The film is directed by Jay Roach (The Austin Power films and Meet The Parents) and stars Steve Carell (The Office and Despicable Me)and Paul Rudd (Friends and I Love You, Man), who have previously teamed up in two other films.

Tim (Rudd) is a rising executive who "succeeds" in finding the perfect guest, IRS employee Barry (Carell), for his boss's monthly event: a so-called "dinner for idiots". The gathering offers certain advantages to the executive who shows up with the biggest buffoon.

Paul Rudd does a good job at portraying Tim Conrad and Steve Carell does even better as Barry, who likes to makes art out of dead mice.

No posts have been made on this movie yet. Be the first to start talking about Dinner for Schmucks!