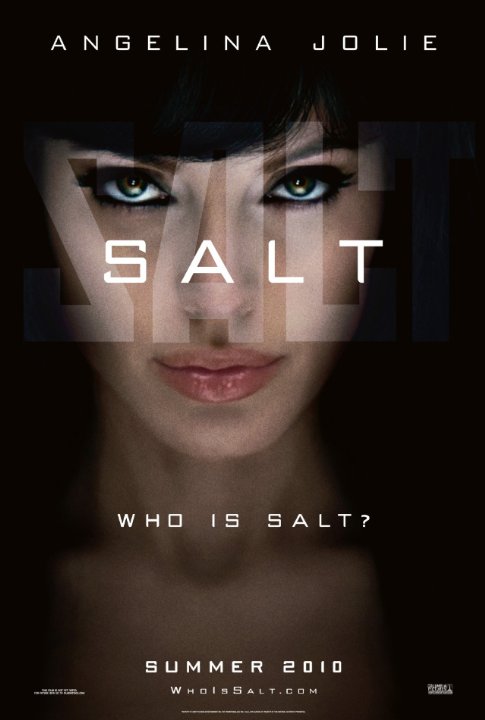 Plot: When a CIA agent is accused of being a Russian spy, she goes on the run, using all her training and talents to elude capture and clear her name. -- Chris Kavan

If you can't figure this out in the first half hour wear a pointy hat for the rest of the movie. Truly trite and totally predictable. Who's the sleeper? Who's the mole? What can we do with a spider? I'm glad I rented this for only a dollar, but I would have done better to wait for the free tv viewing. Technically fine, just too unremarkable.

The premise is definitely interesting, but the emotional depth of the story sometimes gets glossed over by the action. That said, the action is non-stop and efficiently directed, really capturing an adrenaline feeling that continues for the entire film.

When an alleged KGB defector accuses one of the CIA's top operatives of being a sleeper agent, she goes rogue with her former colleagues in hot pursuit. Salt is exactly what you'd expect it to be; a star vehicle for Angelina Jolie that's distinctly lacking in imagination but executed with mechanical efficiency. The plot seems very old fashioned, revolving as it is around the Cold War which seems a long time behind us to the point where having Russian bad guys seems almost quaint. It's pretty much just a flimsy collection of spy mumbo jumbo to make excuses for the next car chase/gun fight and our heroine gamely throws herself into the fray with aplomb. It does at least a couple of twists that make the story slightly less predictable but Salt is pretty much a by-the-numbers Bourne clone …

Fast paced with twists and turns!

Angelina Jolie stars as Agent Evelyn Salt, the CIA operative accused of being a spy for Russia with plans on killing the Russian president to set off a world war. With Counter-Intelligence Peabody (Chiwetel Ejiofor) and her boss Ted Winter (Liev Schreiber) wanting her for questioning Salt has to go on the run from the CIA and kicks ass without staining her pristine white shirt to prove that she's not a traitor.The movie raises the question: who is Salt? Is she a fugitive out to save or kill the Russian President herself?

Guys are sure to enjoy this with close-ups of Jolie's stunning looks and watching her run, leap, fight bound over cars, people, trucks, and subway turnstiles and blow things up to avoid capture by CIA spy guys who quickly turn on her in the name of National …

While watching this film, I had a huge sense of dÃ©jÃ  vu. In trying to craft something original, writer, Kurt Wimmer (âLaw Abiding Citizenâ, âThe Recruitâ) manages to do everything but. The whole plot smacks of everything from âThe Bourne Identityâ to âThe Boys From Brazilâ. The real notion of people not always being what they seem gets lost in all the intrigue, chase scenes and ensuing mayhem. Director, Phillip Noyce (âRabbit-Proof Fenceâ, âThe Bone Collectorâ) seems more intent on meeting his quota of body counts, crashes, and other special effects than focusing on any effort at real character development.

As Evelyn Salt, Angelina Jolie is once again (dare I say type-) cast as an action figure. While Iâd be lying if I said she wasnât interesting to watch …

No posts have been made on this movie yet. Be the first to start talking about Salt!