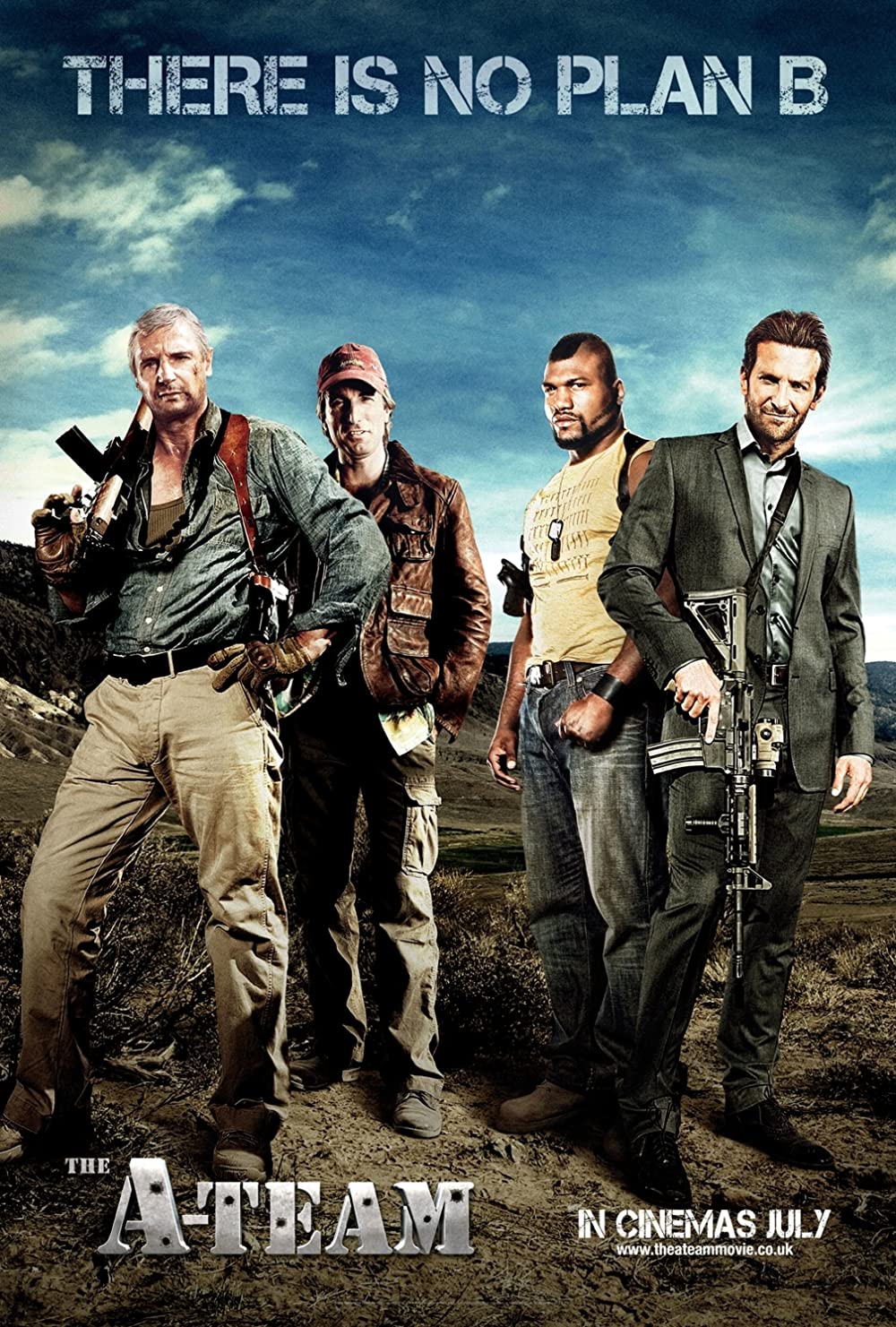 Plot: A special forces unit is framed for a crime but utilizing their unique skills they escape incarceration and make plans to clear their names. -- Chris Kavan

Despite the screaming and explosions on screen every 30 seconds, I was able to sleep fairly soundly through most of this movie. It was incredibly boring.

Some series, movies, comics, ideas, shouldnÂ´t be made. This one was one of that. I want that almost two hours of my life back.

I love it when a plan comes to together. Special forces unit is framed for a crime but utilizing their unique skills they escape incarceration and make plans to clear their names. Before I sawed this movie I thought it will be the worst A-team movie that I ever seen but after the movie was over I was wrong. the action is sweet and cool and the cast all do well jobs in they roles.

"The A-Team" by Yojimbo

Four Air Force Rangers become a covert special ops team but when they are framed for theft and murder they break out of prison to clear their names. I wasn't exactly expecting The Dirty Dozen from this film but the braindead cartoon I was presented with exceeded even my expectations of its stupidity. Liam Neeson makes for a fair Hannibal Smith but Quinton Jackson is just a mumbling homeboy stereotype and the other two just smart mouthed irritants who I would have been quite happy to see blown out of the sky. The dialogue is just a collection of weak, throwaway one-liners and the plot nothing more than an excuse to blow up as much of the scenery as possible and plays out like a Hanna-Barbera version of Mission: Impossible. I found it an impossible mission to care.

"I love it when a plan comes together"

This is a fast paced action movie that stays true to the highly entertaining 80âs series that it's spun from. The action (and cheeky tongue-in-cheek humor) starts almost immediately and doesn't slow down until the closing credits. The film centers on four Iraq war veterans: The team captain, and planner Col. "Hannibal" Smith (played by Liam Neeson), who does a great job filling George Peppard's shoes as Hannibal. He captures all of the wisecracking wit and devil may care charm that Peppard had even down to the cigars. Lady killer and suave con-man/weapons specialist Lt. "Faceman" Peck (a very buff Bradley Cooper), team mechanic and mohawked "BA" Baracus (Quinton Jackson), and true-to-his-name pilot "Howling Mad" Murdock (Sharlto Copley) who …

I finally got the chance to see this movie yesterday, and it was awesome. I always worry when they try to remake a classic TV series, because most of the time they come out terrible. However, these guys did a great job. Quinton Jackson and Sharlto Copley especially nailed B.A. and Murdock perfectly. Liam Neeson and Bradley Cooper did good jobs as Hannibal and Face, but there was a little something missing. For Hannibal, I thought he could have shown a little more personality, or as they used to call it on the series, "the jazz." I thought their Face needed to be more laid back. Cooper was too rock "n" roll when he should have been more easy listening. They also needed to emphasize him being a con artist more. I did love the scene after the credits with Cooper and Dirk Benedict and Copley …

Coming from a fan of the original series, I don't see how this movie is&amp;nbsp;going to live up. There seems to be a few good scenes. They could of done better job casting if you ask me (I do like Bradley Cooper as Face though).

I don't think it is going to be amazing, but could be kind of fun. I have not seen a good fun action movie since Transformers. &amp;nbsp;Most lately have been total crap.

The trailers for A-Team are looking cool and it seems that it got the potential to be a blockbuster. Check out the high definition trailers:&amp;nbsp;http://www.fandango.com/t heateam_115301/movieoverv iew