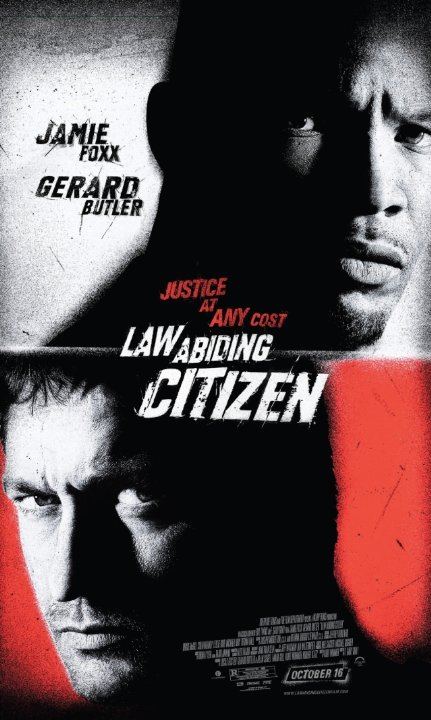 Plot: A man plans to exact his own brand of justice against the man and system that allowed the killer who murdered his family to walk free. -- Chris Kavan

Great lead actors engaged in a cat-and-mouse game of wits that spills out across Philadelphia. It's just too absurd for its own good.

This movie had it's enjoyable parts, but they are so many plot holes and plot twits that didn't work for me.

Clyde Shelton (Gerard Butler) sees his wife and child murdered and raped by Clarence Darby (Christian Stolte). Prosecutor Nick Rice (Jamie Foxx) is Clyde's lawyer but witnesses him shake hands with Darby's lawyer. Rupert Ames (Josh Stewart) was executed thru lethal injection, but is wrongfully accused. The soundtrack was descent and direction was sometimes all over. Butler however depicts a man in pain eager to prove a point about the justice system. The beginning was interesting though the near conclusion runs dry. Law Abiding Citizen is worthy viewing for its unique concept though the lead went too far in the end.

Law Abiding Citizen asks us to celebrate Draconian revenge-based justice and the violation of civil liberties because of the fact that the courts can occasionally be abused to get bad people out of nasty sentences. It uses the rape and murder of a child and her mother to justify the abandonment of neutrality in law and encourage the pursuit of punishment over stability. It uses the grief of a widower to mould a mad, sadistic Knight Templar-type supervillain (played by Gerard Butler) to convince us that violent crime is the result of the law being too soft on offenders. And why does it do all these things? To engender populist contempt, of course, for rehabilitative criminological theories that Americans rarely use anyway; and given the frequency of this type of viciously exploitative …

Gerald Butler is becoming a star!!

Law Abiding Citizen does not fail to bring intensity and intelligence. The movie was great: good character development, great action, good suspense and the plot is alluring. Clyde Shelton, Gerard Butler's character, is surprising likable even with all his misdeeds; I found myself rooting for him at the end. I thought he did a fantastic job with this character â Clyde Shelton was chillingly intelligent and charismatic. The movie shed light on the corruption and problems with the legal system and how one man decides to fight back. Although his actions were extreme, he got his message across and his justice served. Jamie Fox's character, Nick Rice was slightly conceited and not very likable; however he does learn his lesson. As a whole the movie was entertaining and good; howeverâ¦ …

No posts have been made on this movie yet. Be the first to start talking about Law Abiding Citizen!