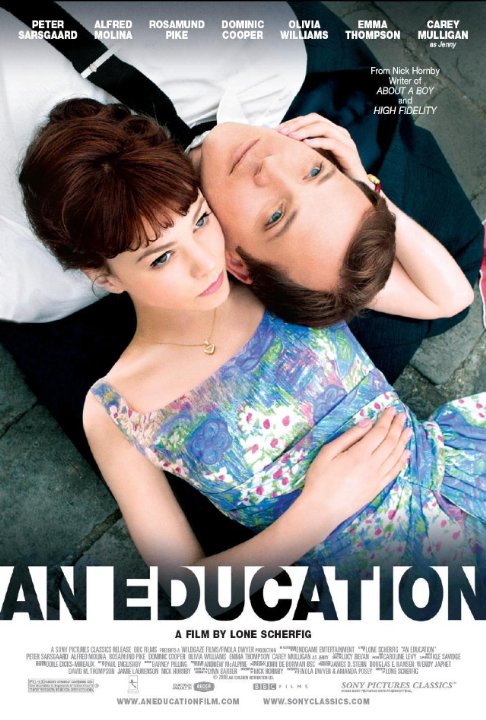 Plot: In London, Jenny is a bright teen, readying herself for Oxford University. Yet she yearns for something outside her straight-forward lifestyle. When she meets David, an older playboy, she revels in the life that is shown her. -- Chris Kavan

From its acting and direction to its script and glorious settings and shots, everything in "An Education" absolutely sparkles.

I think she will get a A+, but first go have sex with a 35 year old man... yeah it sounds really creepy at the first but what can you do.

I enjoyed this one, not a lot happening, but it was interesting to see watch a relationship progress between a young girl and an older man

What doesn't kill you makes you stronger!

An Education tells the coming of age story of a sixteen-year-old school girl, Jenny, who is being prepped by her father to go to Oxford as he wants her to have a better life than he. Enter the handsome, witty, and alarmingly charming David, a wealthy older man who sweeps her off her feet and smooth-talks her parents into letting him take her to Oxford for a visit, then to Paris. Given his wealthy status, Jenny's parents ignore their parental responsibilities and actually encouraged her liaison with David.

Faced with the choice of a safe but boring future and an exciting dose of attention as David exposes Jenny to the life she has always dreamed about, (nice clothes, fancy cars, dinners in exquisite restaurants, jazz concerts and so on), our protagonist must learn a few lessons along …

Setting is London 1961 and David accompanies Jenny (Carey Mulligan) on a rainy day. They go out with Danny and Helen Davidâs friends to watch a concert. David brings them to Oxford and avoids talking about business. Jenny discovers how David earns money and accepts it. David asks Jenny for marriage and eventually leaves school. Jenny discovers David is married and drops by his house. She asks for assistance from Miss Stubbs which will be rewarded afterwards.

Screenplay was astounding with quotes from the Headmistress Mrs. Walters. â âNobody does anything worth doing without a degree.â Jenny â âIf people die the moment that they graduate, then surely it's the things we do beforehand that count.â âIf you never do anything, you never become anyone.â âThe life …

About as good as an educational film

The story is fairly interesting and does have an amazing cast. I am not sure what I liked more - the cast or the story. This won't really make you think Oscar too much but my wife did really like it. It may appeal more to the female audience.

The story is pretty good. A young (in my opinion ugly) 18 year old girl is in love with a much older man. He wins and dines. He impresses her strict parents and takes her to meet C.S. Lewis.

So what is wrong with this film? I guess maybe it is the subject matter and the pacing. It didn't do anything for me beyond the initial scenes. After that it was rather repetitive.

If you liked the reader or similar movies, you may want to check it out. Plus it was nominated for an Oscar so it can't be too terrible...or can it?

No posts have been made on this movie yet. Be the first to start talking about An Education!