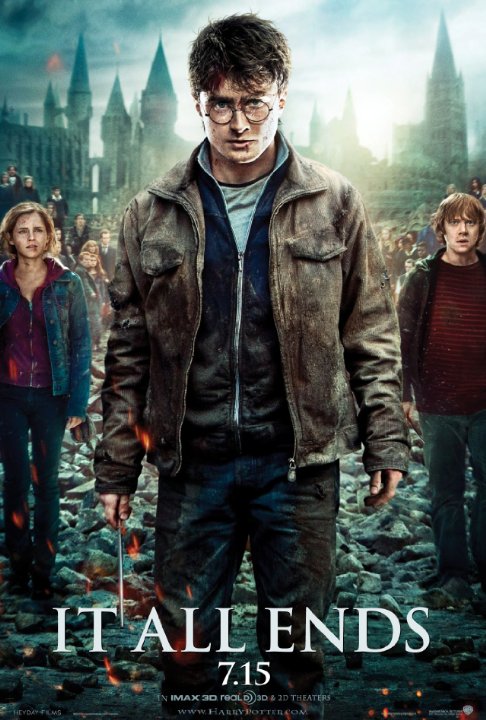 Plot: As the confrontations between good and evil mount, not everyone will survive. Harry Potter faces Voldemort in a final battle to determine who will live and who will die, along with the ultimate fate of the magical world. -- Chris Kavan

This movie is outstanding!! Action scenes were amazing,and the magical creatures were unbelievable.The ending,was not exactly like the book but was interesting.This movie is amazing and I highly recommend it.

This movie had the lowest budget of the last three, and it really showed. While the acting skills of those such as Dame Maggie Smith and Alan Rickman were impeccable as always, this did not save the movie from the watered down cheapness that was a flavour throughout. Perhaps I'm being a little harsh, but I had high hopes for this movie. If you've red the book then this should go without saying: prepare for a big let down.

Well, David Yates has once again disappointed me. Director of the previous 3 Harry Potter movies (Order of the Phoenix, The Half-Blood Prince, and the Deathly Hallows Part 1) as well as this final chapter, Yates has left me unsatisfied every time. It's not that his work on the Potter films have been especially bad (with the exception being Deathly Hallows Part 1), but they've felt weak when compared to the first four films. So while I like Harry Potter and the Deathly Hallows: Part 2, it's so disappointing when one considers that this was a finale that the franchise has been building up to for over 10 years. I can only imagine how disappointed I would've been had I not blown through the series in a matter of weeks.

In this final chapter, Harry and his friends must destroy the …

Harry Potter and the Deathly Hallows - Part 2 is the final adventure in the Harry Potter film series. After seven previous movies reaching back an entire decade the Harry Potter series has reached a solid and satisfying end. It was such a good idea to split the last book into to movies. If you are a big fan of the books as I am, you could arguably say that all the movies could have been made into two parts. As good as that might have been, that would have been far to many movies. The final book however has so much in it that one movie could not have done it proper justice. Before going to see the movie I would pop Harry Potter and the Deathly Hallows â Part 1 in your DVD player, because if you are not up to speed on what is happening you will be completely lost. I saw the first part …

"Harry Potter and the Deathly Hollows: Part 2" closes the adventure of Harry Potter (Daniel Radcliffe) as he now all set to battle against Voldemort- and finish it. Harry, as he deals with the present's unfinished business, he will get to know more of his past and finally sets his future.

Now, it happened. Harry Potter closes his world, the world we insanely got to know and addicted on. I admit, I am not an avid fan of this film series, I only saw the first 5 movies and got a chance of watching the last one( the second part of the two-part finale). And I am not actually sure if I understand the whole thing. And these are exactly the reasons why I should consider this film series as CLASSIC. Not everyone surely know the whole story, but absolutely, everyone heard and have thoughts of …

Just make sure everyone who watches it comes on the site and rates it.&amp;nbsp; It will iron itself out the more ratings it gets.&amp;nbsp; I guess I should watch it so I can actually give it an honest low rating.

I'll see if there is something we can do about it - because I totally agree. Kind of surprised the new Twilight movie isn't the same way yet...

How the hell can this have 12 ratings, it hasn't even been released yet.&amp;nbsp; Whoever rated this already is full of shit.