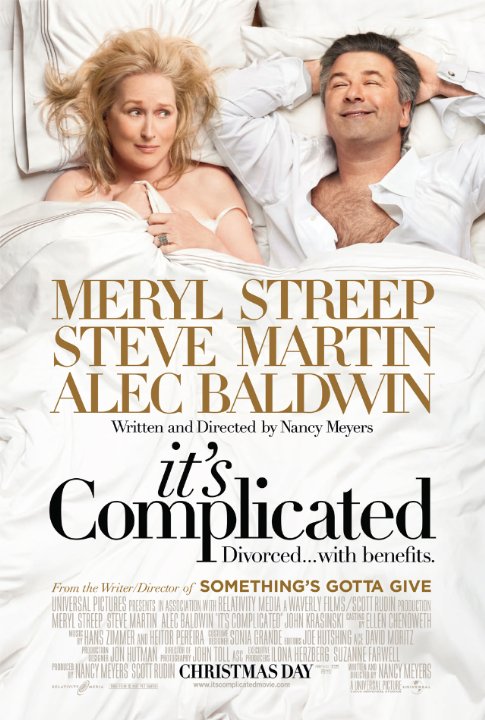 Plot: A woman begins an affair with her ex-husband, despite the fact he's now married to the woman he had left her for. To complicate matters, she's also drawn to a potential new love. -- patjohnson76

A romantic comedy of dubious morality that is nevertheless elevated by its charming cast.

I love how the story went. PLUS, Streep, Baldwin, and Martin are just so good and effortlessly entertaining all together!

The story is about a woman begins an affair with her ex-husband, despite the fact he's now married to the woman he had left her for. To complicate matters, she's also drawn to a potential new love. This movie has so funny parts in it but the ending was not very good.

Ever make major decision in your life and wondered if you did the right thing? Freshman Director and Writer (âFather Of The Brideâ, âSomethingâs Gotta Giveâ) Nancy Meyers takes this every day quandary and deftly applies it to a divorceeâs decision to become involved with her remarried ex-husband in the film âItâs Complicatedâ. While played mostly for laughs, Meyers carefully steers her script and actors on a course that avoids slipping into comedic camp, while fleshing out characters and situations that appear authentic, but still leaves you in stitches.

I think casting was critical in bringing the characters in âItâs Complicatedâ to life. I could write volumes about the acting contributions of Meryl Streep, whoâs acting career spans 30 plus years. Her acting …

It's Complicated brought an interesting spin on a typical love story of a girl being stuck between to men. Just like Christine in Phantom of the Opera, Jane (Meryl Streep) has two equally appealing men vying for her attention. On one hand, you had Jake (Alec Baldwin), the ex-husband you ran away with a 20-something beauty. On the other, you have sweet, lovable Adam (Steve Martin) who is also recently divorced and just looking for someone to be happy with. As she goes through the rekindling of the old fame with Jake, Adam brings himself into her life treating her to the new found love and affection she had once lost with Jake. But she soon finds she will be facing the toughest decision when Jake leaves his wife for her just as Adam starts to really open up to her.

âItâs Complicatedâ is the new film by Nancy Meyers, who has such films as âWhat Women Wantâ, âSomethingâs Gotta Giveâ and âThe Holidayâ to her name. Staying true to her roots, âItâs Complicatedâ is yet another film about relationships, and thatâs not a criticism of any type. Meyers is extremely talented when it comes to picking an ensemble of actors who have on screen chemistry, writing a witty script and making a romantic, comical movie that is not just for chicks. âItâs Complicatedâ is a perfect example of this. Jane (Meryl Streep), a mother of three, has been divorced from her husband, Jake (Alec Baldwin) for ten years and feels as though she has finally got her life sorted out with the perfect house and perfect career for her. That is until a night …

No posts have been made on this movie yet. Be the first to start talking about It's Complicated!