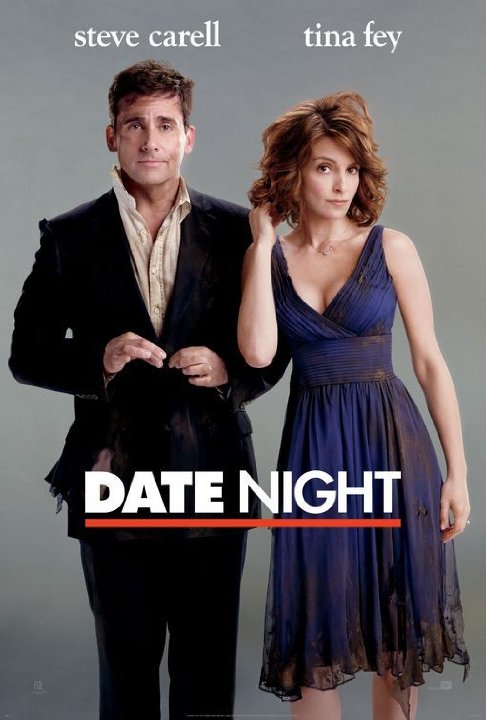 Plot: A mundane married couple, looking for some spark of excitement, get more than they bargained for when a case of mistaken identity has them fleeing from the corrupt cops and the mob. -- Chris Kavan

A date night that I never forget.

Fey and Carrell's chemistry was great on this movie making the boring writing more funny and entertaining. Pretty good movie.

Im not a fan of Tina Fey but I do like Steve Carrell & usually hes funny but NOT in this movie.Fey & Carrell were trying way to hard to be funny & it definitely was not working.The best thing about this movie were the trailers & the movie bloopers when the movie was over.What a shame.I had such high hopes for Date Night

Steve Carrell and Tina Fey do a great job!

The Foster's marriage has lost a little of its spark but both Phil (Steve Carell) and Claire (Tina Fey) are just so grateful to make it through each day with work and family pressures, that focusing on one another just seems unnecessary when sleep is so inviting. They maintain a weekly date night but when their friends (Kristen Wiig and Mark Ruffalo) mention they're getting divorced Phil decides to do something different and head to an exclusive spot in New York City for a meal. Of course it is full so Phil steals someone else's reservation, as they are being paged to be seated the "Tripplehorns" (played by James Franco and Mila Kunis in a hilarious cameo).

Unknown to this somewhat naive couple, the people whose identity they …

A married couple, Phil and Claire Foster (Steve Carell and Tina Fey), plans of having a dinner date to keep the spark going. They steal a reservation slot at Claw and gets into loads of trouble. They ask assistance from Detective Arroyo (Taraji P. Henson). The couple also seeks the aid of the muscular Holbrooke (Mark Wahlberg), "Taste" (James Franco), and his wife "Whippit" (Mila Kunis) regarding the flash drive being searched by the 2 chasing them. The soundtrack was enjoyable and artists were effective in bringing out the humor. If only the character of Wahlberg and Kunis were funnier and the lack of believability in the Audi stuck on the taxi sequence were more realistic. Nevertheless, the onscreen couple did a good job in bringing the picture its necessary laughs and lessons in …

Great Film For A Date

After the somewhat disappointing âBounty Hunterâ, it seemed like tempting fate to check out the new release âDate Nightâ with Tina Fey and Steve Carell. Like I said previously, actual date movies seem to be too far and between, so why not give it a go? Turned out to be a better call than I hoped for.

Directed by Shawn Levy (who also gave us the âNight At The Museumâ franchise and âCheaper By The Dozenâ), âDate Nightâ is anything but predictable. Mixing comedy and a little coupleâs introspection, the film manages to avoid being boring, and offers a number of genuine laughs without resorting to buffoonery.

Fey and Carell play Phil and Claire Foster, a couple whoâs relationship has become mundane and are both beaten down by the daily grind. In an attempt to …

No posts have been made on this movie yet. Be the first to start talking about Date Night!