The Blind Side Movie Information 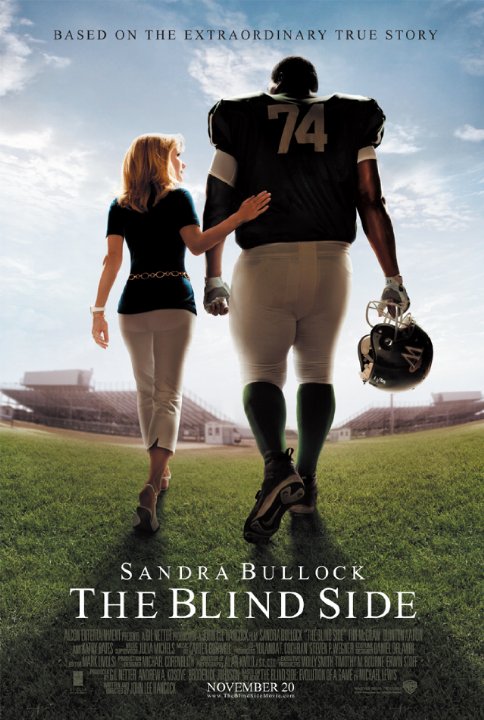 Plot: Based on the true story of Michael Oher, an overlooked young African-American who was taken in by the Touhys who provide him an education and groom his natural talents in football. -- Chris Kavan

An Oscar-baiting biopic that's less about Michael Oher (who's a supporting character in his own story), and more about giving rich, white ladies a chance to pat themselves on the back.

Based on the true story and yes this is a true story of Michael Oher, an overlooked young African-American who was taken in by the Touhys who provide him an education and groom his natural talents in football. This movie was heart warming and excellent on some levels during the film, the acting was great and the writing was good to.

This was a pretty good sports movie. True-stories are always a good way to start out a sports moive, especially when a story is as compelling as Oher's. I cannot stand Bullock in the movie as she chewed through the scenery, this is in part to what the writers gave her, but still. Also, was interested to see this movie go into NCAA regulations and procedures. This is a must-see for football and sport fans alike.

The most heartwarming film ever!

I usually don't like the big movies that win all the awards and here the premise is simple and overused: poor African-American kid who looks retarded but is actually quite intelligent gets the attention of a white, Christian family who help him to discover his talent and subsequently lead him to success in his area of expertise, usually sports (football).

Michael âBig Mikeâ Oher, the young boy in question, is the downtrodden kid from the bad side of town who is taken in by the Touhy family, where he soon becomes one of the family. Sandra Bullock is outstanding as the feisty Leigh Anne and country singer Tim McGraw plays supportive husband Sean credibly. Michael grows to love and care for his family. Because his sense of family is so important to him, he takes his protective …

True story of Michael Oher's struggles and obstacles as a teen African-American in a white community (Memphis). Leigh Anne Tuohy (Sandra Bullock) adopts "Big Mike" since he had no place to go. The Tuohy accepts Michael to their family by making it legitimate. Sean Jr. "SJ" (Jae Head) assists Michael to be the best blocker on the football team of Wingate Christian school. Terrific performances from the cast and a touching portrayal from Sandra Bullock. The lack of characterization is one of the few qualms I have. One would be the background of Leigh Anne. If only the film delved into analyzing her real purpose in helping Michael. Not much memorable cinematography and score, but the themes of motherhood, family and acceptance coupled with the genuine depiction of the artists really …

This was such a great movie. I thought Bullock did an excellent job. This was a very inspirational story that pretty much has you hooked from the beginning. There are some nitpicky things about the film which is why it couldn't get the full four stars. First, we don't really know anything about the Touhys, except, that they are obviously humanitarians. Also, the progression of time is really awkward. You see this tight family bond develop, but as far as we know he's only known them for two weeks. As good as this movie makes you feel, I do wonder how much of it is pure Hollywood. Again, as a whole, this was definitely an really good movie that can be watched over and over again. Bullock definitely deserved the Oscar, maybe not so much because she was the absolute best, but for her career, …

No posts have been made on this movie yet. Be the first to start talking about The Blind Side!