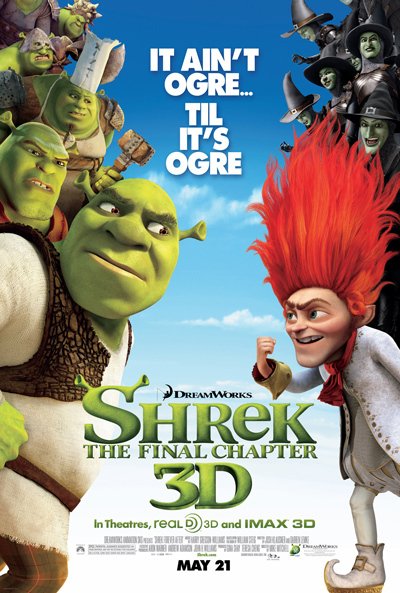 Plot: A simple request to Rumpelstiltskin to feel like an ogre again sends Shrek to an alternate version of Far Far Away where Fiona is hunted, donkey is a stranger and Puss has let himself go. -- Chris Kavan

For a film intended to be a finale to the franchise it doesn't feel very ambitious or ceremonious. "Shrek Forever After" is generic and forgettable.

The film is about a simple request to Rumpelstiltskin to feel like an ogre again sends Shrek to an alternate version of Far Far Away where Fiona is hunted, donkey is a stranger and Puss has let himself go. This movie is way and I mean way better then the third with better jokes.

A hair better than part three. This too has a lame story (copy/paste of 'It's A Wonderful Life), but it's slightly more entertaining. I mean, I at least laughed a couple of times. This series could've gone out on a higher note.

I didnât know what I had until it was gone!

Shrek has hit a mid life crisis and is tired of the whole lovable ogre image and wants to return to those good old days when he was feared as an ogre. He makes an ill-advised deal with the tiny but devious Rumpelstiltskin that will allow him to do just that, but he hadn't considered that with his brand new life came the loss of his old life - including his family and friends. Fiona no longer knows him and, of course, their children don't exist. Not even Donkey knows who he is, and the world is a pretty bleak place in this new life and Shrek must figure out how to turn back time and win his true love Fiona's heart all over again.

We meet several of the characters from the earlier films, such as Puss, Pinocchio, the Gingerbread Man, and the Three Little Pigs, not to mention Donkey's …

And in the morning, I'm making 3D waffles!

âShrek Forever Afterâ is another example of films this year dragging out a phenomenon as far as it can possibly go. It may be suggested that director Mike Mitchell decided to create a fourth instalment to the Shrek series of films in order to utilise the new rage of 3D. However, unlike other films which have done this, âShrek Forever Afterâ is still a ball of fun and Shrek looks anything but tired and worn. This film doesnât bring anything particularly new to the table but is nevertheless fun to watch and enjoyable. Shrek (Mike Myers) has all he could possibly want in life. His wife, Fiona (Cameron Diaz) who loves him, three one-year old ogre children and friends who are always there for him. Yet, he canât help but feel that life is just getting too monotonous for him. When …

It's Fun, but Not Happily Ever After

It's not that Shrek Forever After is a bad film, only that it feels entirely superfluous to the series. Sure, it's fun to puss in boots as a pampered, fat cat or an army of ogres dance to the flute of the pied piper - but in the end, despite some laughs and fun, this Shrek just feels a little empty.

Essentially this is A Wonderful Life, Shrek style. When Shrek signs a deal with the devious Rumpelstiltskin to have one day as a fierce ogre again, he doesn't know the price he's about to pay. He finds out the day he traded for this adventure is the day of his birth, meaning he's living in a world without Shrek - where Rumple is king, witches rule and fellow ogres are persecuted. Fiona is a warrior queen leading the fight against Rumple. There are some fun moments between the two, as well …

No posts have been made on this movie yet. Be the first to start talking about Shrek Forever After!