Clash of the Titans Movie Information 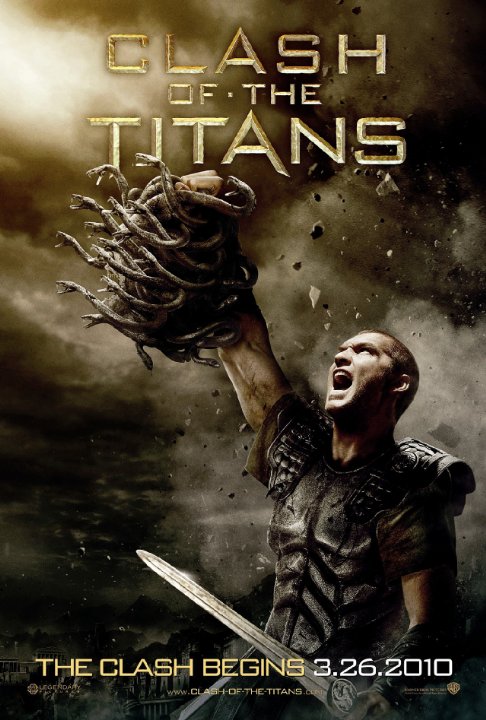 Plot: Perseus, mortal son of the god Zeus, agrees to to go on a dangerous mission against the underworld after losing his family to Hades. -- Chris Kavan

I am a pretty big fan of of old mytholgy and a fan of cgi so yeah i thought this movie was pretty bad ass. I know alot of people hated it and honestly I don't know why? awesome monsters, Awesome story and it stayed pretty fast paced throughout the whole film. I also love the character Medusa and thought she was depicted Great and looked bad ass . Some things did look kinda cheesy and some of the lines in the move take the cheese to a whole nother level... but overall i still think it was a damn good movie.

Im not into Mythology so I didnt expect to like this movie but it was pretty good.Maybe it was the special effects that got me

Great onscreen action and some impressive visual effects. A really wooden cast, however, who brings nothing interesting to the characters and, eventually, the film falls into a cyclical plot of "adventure, action sequence, repeat" which gets old after a while.

No man can stop a god, but Twitter sure can, because Zeus is cancelled.

I haven't seen this since cinema and it still hasn't aged well. Also every time a character says 'Argos', I keep thinking of the English catalogue retailer by the same name. It was hilarious. At this point I stopped taking the movie seriously and made a Monty Python version of this in my head.

I never laughed so hard at my own imagination in awhile.

Here's some funny trivia: "Emma Thompson almost made an accidental uncredited cameo in this movie while visiting friend Liam Neeson on the set. Thompson, who'd been filming Nanny McPhee Returns (2010) in an adjacent studio, went to visit Neeson during a break, just as Neeson was about to shoot a scene with Ralph Fiennes and Danny Huston. Unable to exit the set …

"Clash Of The Titans" by Yojimbo

A warrior with the blood of Zeus running through his veins is charged with defeating a fearsome creature who is set to be unleashed on the city of Argos if its princess is not sacrificed. I wasn't a big fan of the original film so I went into Clash Of The titans with low expectations and surprise, surprise. Even they weren't met. It's just another example of the kind of poorly scripted CGI fests that plague modern cinema featuring dialogue that's all sound bites, characterisation by montage and battle sequences that look more like Transformers than Jason And The Argonauts. As always seems to be the case when hack directors are given a 3D project, Leterrier seemed far more interested in showing various objects spinning into camera than telling a coherent story and there are a host of …

I believe this movie is a guy's movie. You see it for the fights and the special effects. It really has nothing else to offer. And I heard the 3D was done in post-production, which would explain the lameness in that area.
I was very in to Greek mythology when I was in high school (longer ago than I would care to admit) and if you know a fair amount of mythology you'll find this movie as stupid as I did. I just want to point out: Io had a kid with Zeus, now keep that in mind when you rent this movie, cause you really need not pay for it.
Also you really could not tell on God from another. And could someone explain the plate armor? It seems like Liam was so proud that he still fit into his old Excalibur suit, that the film-makers let him wear it in this one.
If you want to watch a good …

We'll see how good it is.&amp;nbsp; Going to see it in 3D, not saying that will make the movie better, but I'll get to see if it makes anything more engaging. I've only seen one other movie in 3D and that was Monster vs. Aliens.&amp;nbsp; For the money, I hope this movie is good!

Is anyone else going to see this this weekend?&amp;nbsp; The reviews have been bad from RT but maybe it will surprise me. I am still seeing it. Anyone with me?http://www.rottentomatoes .com/m/clash_of_the_titan s_2010/