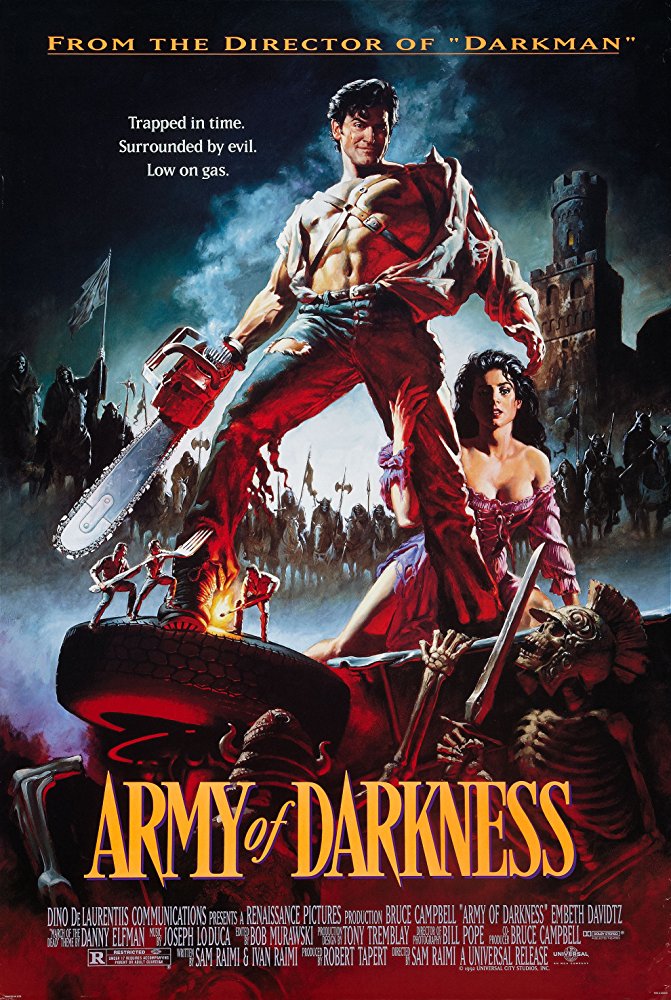 Plot: The third part in the Evil Dead trilogy. An S-Mart employee is sucked into a time warp taking him to the fourteenth-century England. He fights demons with a chainsaw, shotgun and a '73 Oldsmobile to get a book to save the world.

Stuck somewhere between the first two "Evil Dead" films and "Monty Python and the Holy Grail," "Army of Darkness" is totally off-kilter, but is no doubt entertaining.

If the first two were silly, this one is just ridiculous- in a good way, of course. Every time he said "groovy" or "baby" I died a little.

The good the bad am the guy with the gun. The third part in the Evil Dead trilogy. An S-Mart employee is sucked into a time warp taking him to the fourteenth-century England. He fights demons with a chainsaw, shotgun and a '73 Oldsmobile to get a book to save the world. This movie is funny and bad-ass.

Great finale to the Evil Dead series...or is it?

I remember back in the day watching the original Evil Dead for the first time and feeling weird at myself mostly cause I was laughing throughout the whole thing. Then I saw the rest of the films in the trilogy including Army Of Darkness, and said these were movies that director Sam Raimi made exactly for that reason...to laugh and being terrified at the same time, creating a brand new genre known as comedy-horror....A genre that only Raimi has tapped into so far (I hear the 2013 remake of The Evil Dead doesn't contain one single drop of comedy and is actually quite frightening in scenes. Although that still remains to be seen.)

Army Of Darkness continues with the events of the Evil Dead 2's ending Ash(Bruce Campbell), with his chainsaw loaded hand and his '73 Olds flying through …

"Army Of Darkness" by Yojimbo

Ash finds himself in the 14th century where he must battle an army of the dead to prevent them getting their hands on the necronomicon and laying waste to the world. Evil Dead 2 was an undeniably ridiculous film and its combination of over the top gore and humour makes it one of my favourites. Army Of Darkness follows on directly from the end of that film (sort of...there's a little Saturday morning serial style re-writing going on!) that gives Sam Raimi the opportunity to throw some swashbuckling and Monty Python And The Holy Grail humour into the mix. Imagine A Connecticut Yankee In King Arthur's Court if the Yankee were an obnoxious, smart mouthed convenience store clerk and King Arthur's Court were full of zombies. The humour is if anything even broader this time around, as the evil …

No posts have been made on this movie yet. Be the first to start talking about Army of Darkness!