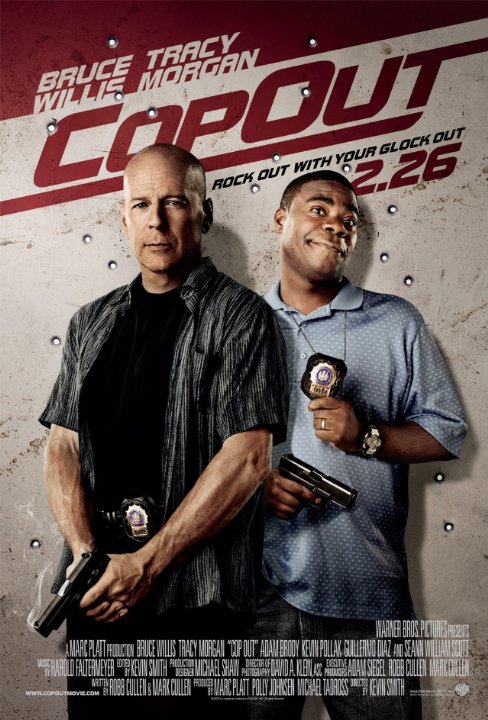 Plot: Two cops with conflicting personalities find themselves on the case of a stolen baseball card, a Mexican beauty and laundered money. -- Chris Kavan

This movie got under my skin in a bad and gross way. you know that feel when you are watching a bad movie and you get that chilling feel inside, yeah that's what this movie did to me.

Nothing special. It is a funny buddy-cop movie that fans of the genre will enjoy. I liked it a lot and will re-watch.

I feel so stupid for renting this movie & then watching it without falling asleep.Cop Out has to be 1 of the most dumbest movies I've ever seen & I'm an idiot for wasting my time when I should've turned it off after watching the 1st 10 minutes

Jimmy (Bruce Willis) and Paul (Tracy Morgan) are longtime partners in the NYPD who are trying to bust a drug ring when things go wrong on a stakeout and they find themselves suspended from duty. To make matters worse, Monroe's daughter (Michelle Trachtenberg) is engaged, and the only way to save face with her and show up her stepfather (Jason Lee)is to pay for the entire wedding. Paul also has his fiar share of problems because he is convinced that his highly attractive wife (Rashida Jones) is having an affair with her neighbour (Michael Pitt).

Unfortunately Jimmy gets unceremoniously robbed by Dave (Seann William Scott the guy from the American Pie series) and the card ends up in the possession of Poh Boy (Guillermo Diaz) a ruthless Mexican gang leader, who also happens to be a …

James "Jimmy" Monroe and Paul Hodges (Bruce Willis and Tracy Morgan) are partners for the NYPD. Paul suspects his wife from cheating while Jimmy tries to sell his card to pay for his daughter's wedding. Much like a Sandler film, it had too many unbelievable scenes like a cop pointing to people when talking, quoting movie lines, dragging Dave (Seann William Scott) at the back of the car, and many more. It had its funny moments and soundtrack decent. The major suspect is the dreary script, which is unfortunate since the director writes wonderful screenplays. Intent was good, if only the script and execution were well though of. Cop Out overall is a childish cop flick that only diminishes our intelligence when it comes to comedy, as if we were watching a sitcom on television.

Bruce Willis Didn't Get The Memo

Memo To: Kevin Smith
Subject: Movie-Making Suggestions
Kevin, the next time you go to make a film, you might want to consider having a script first. Better still, if you have a script, get someone else to read it over - preferably someone you donât know that well and might give you an honest opinion. If itâs another comedy, jokes would be good â but they have to be funny next time. While youâre at it, look up the word contrived. That style doesnât make for a good film â ever!

Memo To: Bruce Willis
Subject: Career Moves
Bruce, remember âThe Sixth Senseâ? How about âTears Of The Sunâ? These were good roles. Did you even look at a script for âCop Outâ? Oh wait, there wasnât one, was there? Are you gunning for quantity over quality these days? The goal is to …

Worst 8 of 2010 by Stoney McStonerson

No posts have been made on this movie yet. Be the first to start talking about Cop Out!