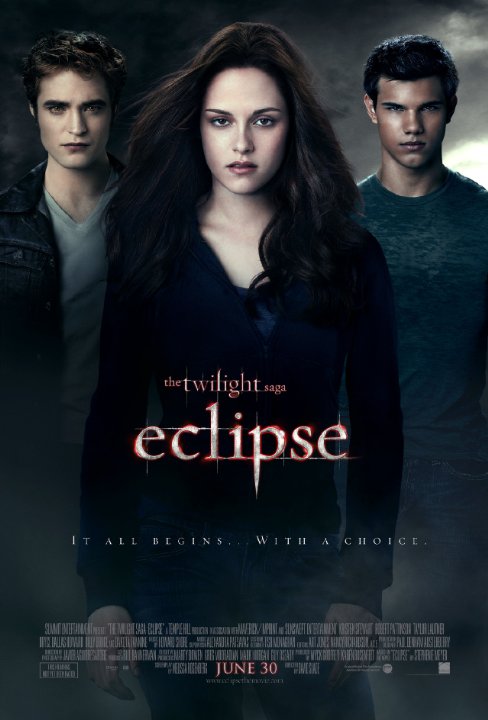 Plot: With Bella and Edward reunited, Bella faces many choices including whether continue her friendship with Jacob and whether to take the ultimate step to become immortal. With graduation approaching, and a vampire still seeking revenge, Bella must choose carefully. -- Chris Kavan

Almost everything about this film was a major improvement upon the first two installments, but I had a real hard time getting into this one; I found it to be slow, uneventful, and surprisingly boring.

I remember not enjoying this film. Worse of the franchise. Too much marketing and hype for this type of film and genre. Even the premise of the love triangle was horrendous. Could have been rated higher if it had better script, acting, cinematography and soundtrack.

Continuing where the second film ends this one tells the third stage of Bella's (Kristen Stewart) decision making process. She's still tossing and turning between her vampire boyfriend Edward, portrayed by Robert Pattinson (as the controlling boyfriend who won't allow Bella to see her friends) and Jacob (the ever-shirtless Taylor Lautner) who try as he might, will never exit the "friend zone." Whilst Bella is still intent on becoming a vampire, Edward is doing his best to put her off the idea. Things are further complicated by the vengeful Victoria (Bryce Dallas Howard), who with the now-undead Riley (the coldly menacing Xavier Samuel) as her right-hand man, is raising a newborn vampire army, a ravenous and ultra-strong force which is intended to destroy Bella and Edward. In order to …

Oh, you know...it's a Twilight movie. It's boring. They're pretty. Eyerolls galore. I wish these movies would really GO for it, you know? Maybe it's because the story isn't interesting enough to carry a super campy style, but I think they could do it. I want more pizzazz! Even WORSE acting! Swelling scores (no more Muse, please?)! Sex (fucking Mormons)! I want to see vampire limbs get ripped off, not shatter into lame sparkly little pieces! I want to see werewolves transform back into naked teenage boys! I want to see Kristin Stewart play with her hair and I want to hear R-Patz accidentally slip into his British accent. I want the vamps to still wear purple lipstick and have contact lens lines. Where are the sassy one-liners?

It's kind of like Hairspray. Or Glee. Both things I SHOULD …

My experience with the Twilight movies and books went something like this. Due to the hype I rented the first movie on dvd. I saw it's potential but it was horribly flawed. I went to a coworker who is a huge fangirl and actually agreed with me on all the points the movie lacked and claimed the book was better. So sure enough I read the book, which was even more flawed. Several months later coworker asked me to join her to see the second movie, New Moon in theaters. I begrudgingly agreed. Low and behold I actually really liked it. Full of action and this strange thing to the twilight universe called decent acting and a plot. I went home and bought Eclipse read it. Eclipse was so good it made me read breaking dawn. Breaking dawn was so bad it made me regret reading eclipse. Eclipse was by …

No posts have been made on this movie yet. Be the first to start talking about The Twilight Saga: Eclipse!