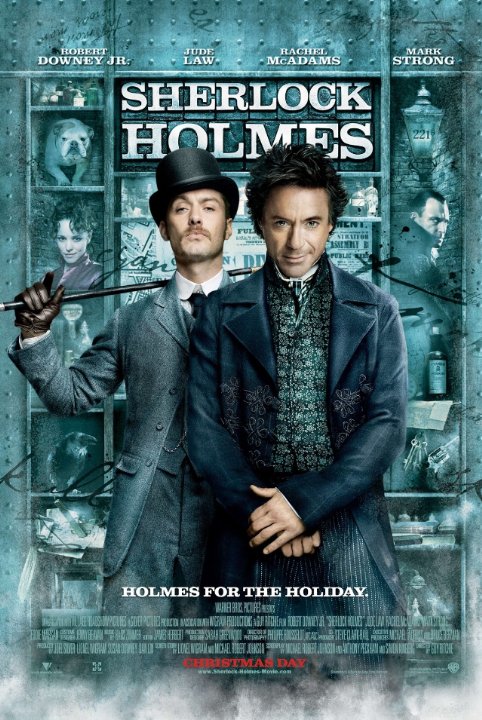 Plot: A new take on the old legend - Sherlock Holmes and the ever-present Watson are still on the case to unravel a nefarious plot to destroy the country, but this time he's just as keen using his fists as his mind. -- Chris Kavan

Guy Ritchie's untraditional interpretation of Sherlock is just as much fun as it is disjointed.

A new take on the old legend - Sherlock Holmes and the ever-present Watson are still on the case to unravel a nefarious plot to destroy the country, but this time he's just as keen using his fists as his mind. Sherlock is back and ready to make another movie of him in action. Robert Downey Jr. did alright Sherlock but to me Sherlock Holmes is a fast talker, crack head the loves the sound of bars closing in on the murder.

Bringing his signature kinetic action directing style to a new universe, Guy Ritchie creates a film that shies away from the more philosophical elements of the Holmsian world in lieu of a slick and very entertaining action thriller. The pseudo-dystopian universe is beautifully realized and the action set pieces that frequently populate the film are a marvel to watch. Of course, the film's heart is a charming and lively portrayal by Robert Downey Jr. who hovers between the cockiness of Tony Stark and the wry sarcasm he displayed in Kiss Kiss Bang Bang.

Hmmmm. There are action sequences, plenty of one liners, and Robert Downey Jr. I can only deduce that this is another Hollywood box office smash. And silly old me, I just saw the film. My friends pestered me about this for the longest time. They loved the film, and were positive I would too. I told them I'd get around to it, until finally one of my friends lent me the movie to watch.

My feelings about this unique film are a little mixed. The film wants to be clever, but very little smarts at all are needed to view this film. Naturally, this film is geared towards teenage boys, who for the most part, are not interested in an intellectually stimulating film. They just want to see Downey deliver witty lines, and watch him beat up thugs. So, if that's what you came to see, you will not …

Holmes and Watson prevent the dastardly murder of an innocent girl during a satanic ritual, but when the would be murderer seems to come back from the grave the dynamic duo seem to have met their match....RockNRolla was a strong indication that the Ritchie formula was starting to wear a little thin, but the reinvention of Sherlock Holmes as a hard-drinking, bare knuckle brawling geezer was ringing some serious alarm bells with me (especially since the trailer made it look like Van Helsing 2). Thankfully, Robert Downey Jr. pulls out all the stops to make the character an infectious, eccentric cross between Doctor Who and Indiana Jones, and somehow it works brilliantly. He is perfectly complimented by Jude Law who shares great chemistry with his co-star making them a real Butch And …

Director Guy Ritchie is known for his action films (âLock, Stock And Two Smoking Barrelsâ and âRocknRollaâ), so thereâs no surprise that his take on this iconic fictional character would include some measure violence and mayhem. No - the surprises come from the complex characterizations, the historical setting, and infusion of the aforementioned action element into what still is an intellectual âSherlock Holmesâ. Ritchie has managed to execute a delicate balance between flying fists and perplexing puzzles in a film that also carries a fairly accurate backdrop of late 19th century London with a story line that demands the viewerâs attention.

No posts have been made on this movie yet. Be the first to start talking about Sherlock Holmes!