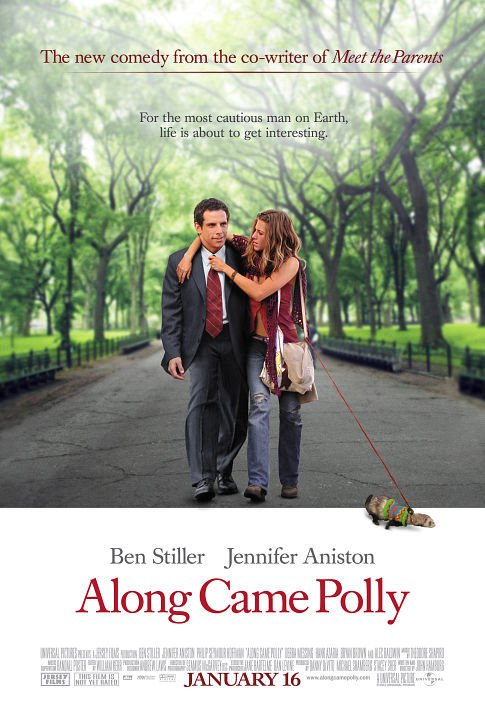 Plot: After discovering his wife's infidelity on his honeymoon, insurance salesman Reuben Feffer, who always plays it safe, runs into an old classmate, Polly Prince, a free spirit with a sense of adventure. When he decides the benefits outweigh the risks, he'll go to great lengths to keep Polly interested in him. -- Chris Kavan

One of Stiller's worst.

This was a terribly crummy film and could have been much better. A $300 loofa. Still haven't gotten over the price.

Can these two opposite people fall in love?

Ben Stiller plays an uptight risk analyst Reuben Feffer whose wife Lisa Kramer (Debra Messing) cheats on him with a French scuba diving instructor Hank Azaria on the first day of their honeymoon. Disillusioned, the cuckolded Reuben immediately returns home to New York and his best friend Sandy Lyle (Philip Seymour Hoffman) invites him to go to a party. There he runs into a childhood friend and bohemian waitress Polly (Jennifer Aniston).

The oddly-matched pair begins to see one another and Reuben finds adventure and love in this unpredictable lady who rips him away from his conventional and highly organized creature-of-habit life style. Anniston is the antithesis, digs Salsa dancing, loves to eat ethnic food with her fingers, has a sexy tattoo on her lower back and lives in a NYC …

While in his honeymoon in a paradisaical beach, the conservative risk analyst of an insurance company Reuben Feffer (Ben Stiller) finds his wife Lisa Kramer (Debra Messing) having intercourse with her scuba instructor Claude (Hank Azaria) in his boat. The cuckold Reuben immediately returns to New York and his friend Sandy Lyle (Philip Seymour Hoffman) invites him to go to a party. There he meets his former high school friend Polly Prince (Jennifer Aniston), who is a very independent woman that lives in the edge with her blind ferret in a cozy but simple apartment. Although having very different behaviors, they date and fell a great attraction for each other. When Lisa returns, Reuben has to decide if he wants to live his life in the suburb with his unfaithful wife, or have a risky …

No posts have been made on this movie yet. Be the first to start talking about Along Came Polly!