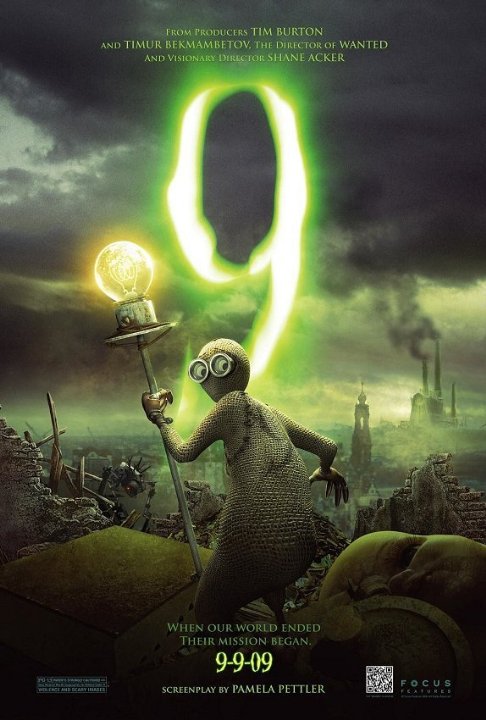 Plot: Animated: A community of animate rag dolls residing in a post-apocalyptic world discover one of their own, named, "9" (Elijah Wood), may be able to lead them to survival.

Animated: A community of animate rag dolls residing in a post-apocalyptic world discover one of their own, named, "9" (Elijah Wood), may be able to lead them to survival. this movie is not for kids or family because they is one scene when the main character sees a dead baby and a dead mother now that is a dark scene. the main character is stupid and the animation is the best part of this movie.

This movie was disappointing. I expected much better from this movie. Although the animation was stunning, the plot didn't interest me much. I also thought this movie was a little depressing. All these Apocalyptic movies. We need more movies like "Up". Another problem I had with this movie was that it was too short. Usually the problem is it's too long and you get bored, but here I wasn't satisfied with the length.

I loved the premise of this movie. Loved it.

3D Animation in Post-apocalyptic, not for kids.

9 started off as a short film as a student project that was picked up and created into a longer film. I'm not going to explain about the plot because that can be easily found in the outline or other reviews.

If you enjoy 3D animations, post-apocalyptic worlds, emotional film, steampunk, watch it. The 3D animations were beautifully well-done. I have a degree in game art and understand the workings of how 3D animations works and textures (my expertise), and I was very impressed by this.

This is no means a kids movie. They won't understand nor have emotional attachment to the characters. it's a darker form of computer-animated film. Don't expect to laugh. There may be a few chuckles here and there.

9 is not a casual film. This isn't the kind of movie where you invite a bunch of friends over, expecting an "awesome" movie. That's not to say it's a bad movie, it's quite good in fact. It's just not a typical film. It's bleak, it's eerie, and even the action, though strong, has a lot of symbolic meaning.

I don't often watch films like 9, nor do I want to. 9 offers only a few smiles, and no laughs. Rule #1 for me, it has to have humor. I don't mind serious films, but a little humor can go a long way in helping me remember the film, and enjoy it. 9 manages to entertain without laughs.

But 9 has a lot of emotion anyway. Fear certainly comes to mind, as does sadness. The PG-13 rating was not earned from language or sexual content. Part of it comes from the bloodless, yet intense …

2009 has shown its fascination for the number 9 be it District 9 or this. As the title suggests, there are 9 main characters and this is the third theatrical computer animated film to be rated PG-13. With those factors in mind, you'd probably assume it's a computer animated film for adults considering the way it was advertised. Obviously when you see the advertisement in theaters, you'd assume this is the case. So you might be wondering, does this movie compare to other computer-animated films, well overall I can say it's an alright movie, but it doesn't compare to the greats, particularly this year's Up. Basically this is the story in a nutshell, machines have taken over the world and killed off humanity. However, a scientist has invested his soul into 9 sack boy like creatures with the …

No posts have been made on this movie yet. Be the first to start talking about 9!