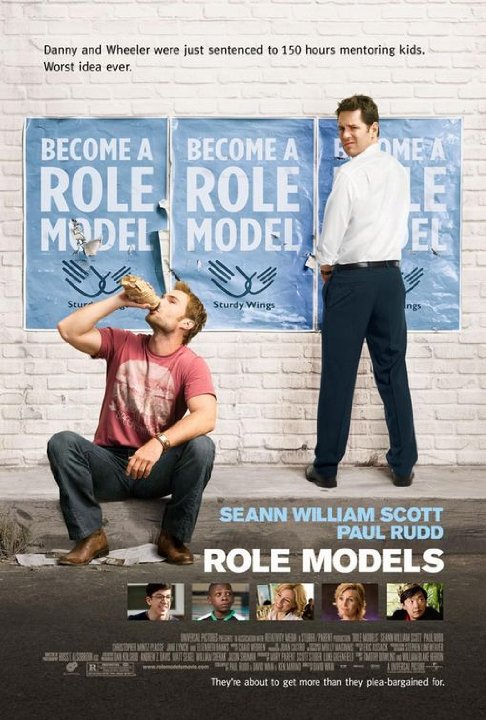 Exceptionally moving, especially from such crude but funny material..

This movie is a comedy. The characters aren't very believable, but just take them as they are and this is a pretty funny movie. Paul Rudd is awesome in this movie. He is not a fantastic actor or anything, just funny to watch. This is definitely worth a watch if you just want a nice easy movie to enjoy.

I would consider this David Wain's most successful film - a wild comedy that thrives on the energy and enthusiasm of its stars. The film isn't the smartest of comedies, but it is consistently funny and boasts a talented supporting cast, who steals many scenes from Rudd and Scott.

Danny (Paul Rudd) and Wheeler (Seann William Scott) are two friends who promote an energy drink called Minotaur. Lawyer Beth Jones (Elizabeth Banks) feels that she isn't making Danny happy. Wheeler and Danny attends community service wherein they need to be role models to a kid who swears a lot named Ronnie (Bobb'e J. Thompson) and Augie (Christopher Mintz-Plasse) who loves role playing medieval type games. The idea of adults being so rude to kids and a rude foul mouthed kid was just too unbelievable. The script was solid and support even better than the leads. Obviously the director has a fascination with Kiss so the soundtrack is definitely rockin. Best lines: Danny - "Look, life is hard, all right?" "Maybe they just understand that life is pain, and if you smoke something or …

A little bit dry for my taste

I'm fairly disappointed to find out that Role Models were not your typical comedy. Well I think it's because the dry humor delivered by the two lead actors doesn't really work for someone like me. Although I find it a little funny to see kids and adults alike doing role playing but that's about it. I don't find Seann William Scott (aka Stifler) funny. Even Paul Rudd isn't that funny, I mean for the most part. I think that's the thing, from the get go you kind of expect what to see when you bring these two guys together. The Stifler guy always seem to be the same character in every single one of his movies. And Paul Rudd, I really donât know if heâs the right guy to do this stuff maybe if heâs to be paired up with someone like a Seth Rogen now that would be funny. There are …

One of the Most Brilliant Comedies of 2008

Paul Rudd and Seann William Scott star in Role Models as Danny and Wheeler, two salesmen who trash a company truck on an energy drink-fueled bender. Upon their arrest, the court gives them a choice: do hard time or spend 150 hours with a mentorship program. After one day with the kids, however, jail doesn't look half bad. Once the center's ex-con director (Jane Lynch) gives them an ultimatum, Danny and Wheeler are forced to tailor their brand of immature wisdom to their charges, Augie (Christopher Mintz-Plasse) and Ronnie (Bobb'e J. Thompson). This was a very funny film, excellent screenplay, with engaging characters, film plot, and a good ending. I recommend this highly to anyone who appreciates a good comedy. The film is sincerely satisfying. "Role Models" knows its place and tries …

No posts have been made on this movie yet. Be the first to start talking about Role Models!